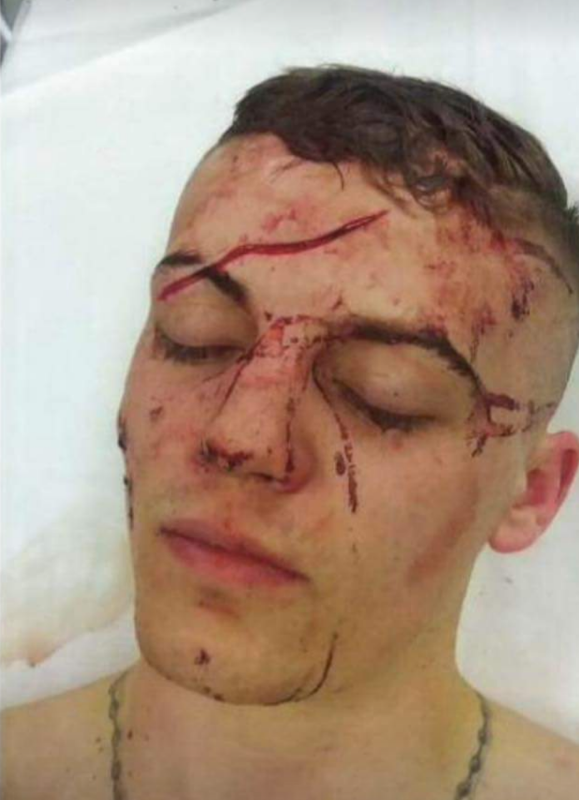 Luke Evans (7-0) has already won the biggest battle of his career by getting his life back on track following a horrific knife attack. On Saturday night, the 21 year old from Salford will attempt to get his boxing career moving again when he returns to the ring on Steve Wood’s VIP show at Bolton’s Macron Stadium.

“I’m buzzing. I’m really happy to be back. It’s been twelve months but it feels longer. All the hard work is done now,” Evans said.
“I remember being at a VIP show watching last November. I’d put two and a half stone on and I just felt like there was no way back for me. I’ll be honest, its still tough now but at least now I have something positive to focus on and I’m just looking forward to Saturday.
“I’d missed out on a few fights and a new group of lads came through around my age group. I feel like I’ve been overlooked and forgotten about and it’s sad. In a way I was almost jealous of seeing other people getting the limelight while I was stuck at home with no way out of the bubble I was stuck in. I’m glad to say that I’m out of that bubble now.”
When Evans answers the bell on Saturday night, it will be one day short of a year since his last outing. Things went wrong as the unbeaten light welterweight and his then girlfriend walked home after watching the fight between Floyd Mayweather and Conor McGregor last August. A large group followed and eventually cornered them. With trouble certain, Evans called his father – who was in a nearby pub – to come and help him.

“One cut was really close to my eye. What’s really sad is that since my attack it seems to be happening more and more and we’re seeing it more often on the news. I’m trying to raise a bit of awareness about the whole situation if I can. Attention-wise, the attack is going to stand me in good stead but it’s for all the wrong reasons.”

After moving his girlfriend to safety and with his father struggling under attack, Evans plunged in to help. His dad escaped but Evans sustained horrendous facial injuries when one of the group attacked him from behind with a knife. The physical injuries will heal but the mental ones will take much longer.

“It’s still hard and it still affects my everyday life. I’m still receiving counselling but I’m mentally good now,” Evans said. “I’m focused on things again and big things are expected of me. Hopefully I deliver on Saturday.
“The scars have healed miles better than they thought they would. It feels absolutely fantastic. I’m really, really happy with how they’ve healed. I’m gonna be scarred for life so they aren’t going to change too much now but I’m happy to say that they’ve healed to the best possibilities.
“One cut was really close to my eye. What’s really sad is that since my attack it seems to be happening more and more and we’re seeing it more often on the news. I’m trying to raise a bit of awareness about the whole situation if I can. Attention-wise, the attack is going to stand me in good stead but it’s for all the wrong reasons.”
Evans was just a single fight into his partnership with Blaine Younis at the Hatton Gym in Hyde when disaster struck. Although at 5ft 9in tall he is tall for a light welterweight, Evans likes to step around his opponent and work the body in the manner of his hero, Ricky Hatton. If there is anything positive at all to be taken from the past year, it is that he has been able to settle in at Hatton’s and spend some time working on his style.

“Blaine is my head coach and Mike Jackson is my secondary man. Ricky has been in the gym and he’s been giving me a lot of advice. I feel like I’ve developed as a fighter and I’ve matured a little bit more. I also feel a lot stronger.
“We’ve been working a hell of a lot more on technique. Fitness-wise I don’t really have a problem so we’ve been working on my technical boxing. I feel like I’ve improved and I’m looking forward to putting everything I’ve learned together on Saturday.”
Of course, there is a big difference between being fit to fight and being fighting fit. The deep lacerations he suffered have left vivid scar tissue on his face and throughout training, the thought of the cuts re-opening at the first sign of contact haunted him. With his return to the ring drawing near, Evans decided to give himself a trial by fire during his final sparring session.

“I’ve not sparred without a headguard yet. My last sparring was on Friday with fellow VIP fighter Kane Gardner (5-0, 2 KO’s) and we did six rounds. The punches themselves haven’t done any damage to the scars.
“I stood toe to toe with Kane. I needed that. I needed somebody who would try and push me back and bully me. I’m very happy with the scars.
“In a fight I’m not going to stand toe to toe and let somebody try and take my head off but in sparring your body has to get conditioned to it. It was in my mind that I needed to maybe take some unnecessary punches just to see how the cuts are. Now I’ve tested that out, I can cross that box out.
“I want a couple of fights this year and a couple more early next year and then we’ll see where we’re up to. I’m quite nervous and excited. It feels like my debut all over again. I just can’t wait to get in there and show everybody what they’ve missed out on for the last year.”

Videos of Luke talking about the attack