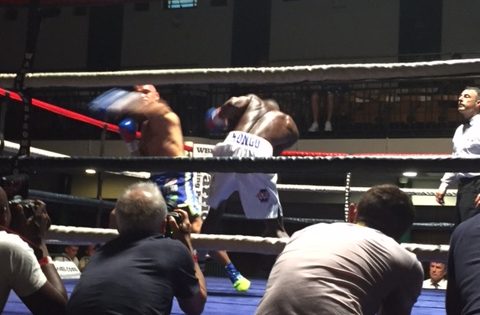 The marquee bout of the evening on the British Warriors promotion at the iconic York Hall came to a premature end after just 74 seconds. The emerging talent that is Bermondsey’s Chris Kongo needed little more than a solitary minute to deal with 100 fight veteran Arvydas Trizno in their super welterweight contest. The man known as “2slick” was just that in leaving the crowd hungry for more following his eye-catching dismantling of his Lithuanian foe.

The early exit marked the first time in nearly three years and 45 contests that Trizno had failed to hear the final bell. The last occasion also being a 1st round reversal at the hands of Dundee’s tragic Mike Towell back in 2015. The ease with which Kongo squeezed the fighting desire from such a proven tough and durable opponent, is worthy of significant praise.

Kongo, started strongly and worked his man over from the opening bell. These early sapping shots opened up his opponent and allowed the well supported local prospect to drop Trizno onto his backside with two big right-hands. The referees count was negotiated and unsteady footing resumed. But, everything about the Lithuanian’s body language and posture suggested that he wasn’t unhappy when the referee waived this one off early.

The 25 year old now moves to an unblemished 9-0 with six victories via the short route. Harder days will and need to come, but right now Jim McDonnell is bringing him along at just the right pace with the Bermondsey boy in very good hands.

In the evenings other high profile encounter Jeffrey Ofori bossed Hull journeyman Luke Fash in their super featherweight matchup scheduled for six rounds. After a cagey opening stanza the rangy Londoner began to find his distance over his smaller opponent. A piston-like jab accompanied by the full smorgasbord of shots proved too much for the Yorkshireman as the referee intervened decisively in the fourth round.

As impressive as Ofori was he never really looked like landing a single punch finisher and it was the sheer volume and variety of his punching that proved too much for his game opponent. This was the perfect tune-up and workout for “Jeffy” ahead of his September showdown with Jumanne Camero for the Southern Area lightweight title. The 5’11 Camero will provide a very different proposition to the diminutive Fash, but one that Ofori possesses the right credentials to overcome. Following this success the 28 year old moves to 7-0 with two stoppages.

Elsewhere on the card former Team GB boxer Alfie Price picked up his second victory in the professional ranks against the granite tough journeyman Fonz Alexander. In an impressive display the 24 year old southpaw mixed it with the boxing Wildman over four rounds and collected the unanimous verdict.

This type of contest will aid Price’s development as he navigates the first fledgling steps of his hotly anticipated career. For Fonz Alexander: the Henry Winkler, Ralph Malph, Laverne and Shirley of the fight game; it was a familiar rumbustious day at the office. He is hard wired to keep moving forward regardless of the amount of squeezed leather that massages his face. Alexander’s tattoos are so many and varied that Angel Manfreddy would swoon in admiration. His hair slicked tightly before the opening round merely being an object lesson in futility, as it fell into a straggly wild mess before the opening exchange was over. A cue for those at ringside to take cover from the lashing sweat, as Price began to connect with painful regulatory as the fight progressed.

In an earlier bout, another of those small hall heroes, Lewis Van Poetsch stepped out to put 24 year old Jimmy Smith through his paces in their six rounder. Smith returned to the ring on the back of a surprise loss last time out against opponent Yailton Neves. Despite, starting strongly in their encounter Smith faded sharply in the final stanza as the man known as “Poochi” connected liberally with an arcing right hand. Smith deservedly got the verdict via a margin of 59-56, but an extra round or two would have made things very interesting. With this win Smith moves to 6-1, with all his wins coming over the long route.

Meanwhile, “Poochi” will take his white dressing gown – the type you can probably lift from the wardrobe of your local Holiday Inn- and his flat “Peaky Blinder’s” cap to another town near you, and put himself on the line against yet another prospect. Full of charisma, heart and bottle the domestic game would be poorer without his presence.

Other highlights on this excellent promotion were the brawl in a phone booth war between heavyweights Darren Gibbons and Aaron Green. Gibbons (2-0) springing out of the traps with such wild intensity that it seemed he had missed the four round memo and was working to a 40 second directive. Green on debut had a couple of uncomfortable moments, and took some relatively clean shoots, but Gibbons seemed to lack the arsenal to make anything stick on a more permanent basis.

Backed into the corner by the impressively built Green, he kept throwing punches, with casual disregard of any notion of defence. Green, working well to the body, sized up his opponents defensive frailties and ended it all with a single booming overhand right, that left the defeated Gibbons dangling face first through the ropes like an abandoned puppet. The timekeeper recorded the denouement as 2:32 of the 1st round.

Slovakia’s Rudolf “Soldier Boy” Durica bound his way to the ring accompanied by the familiar strains of the “Rocky” theme tune. However, following the entrance of Luton’s well supported and much touted debutant Alec Bishop, it appeared as if someone had messed up the soundtracks. Bishop, in impeccable condition could have been mistaken for Carl Weathers in his full Apollo Creed mode.

Bishop jabbed and moved impressively, in picking up the unanimous decision, in what was a strong debut against the 39 year old, greying Durica.