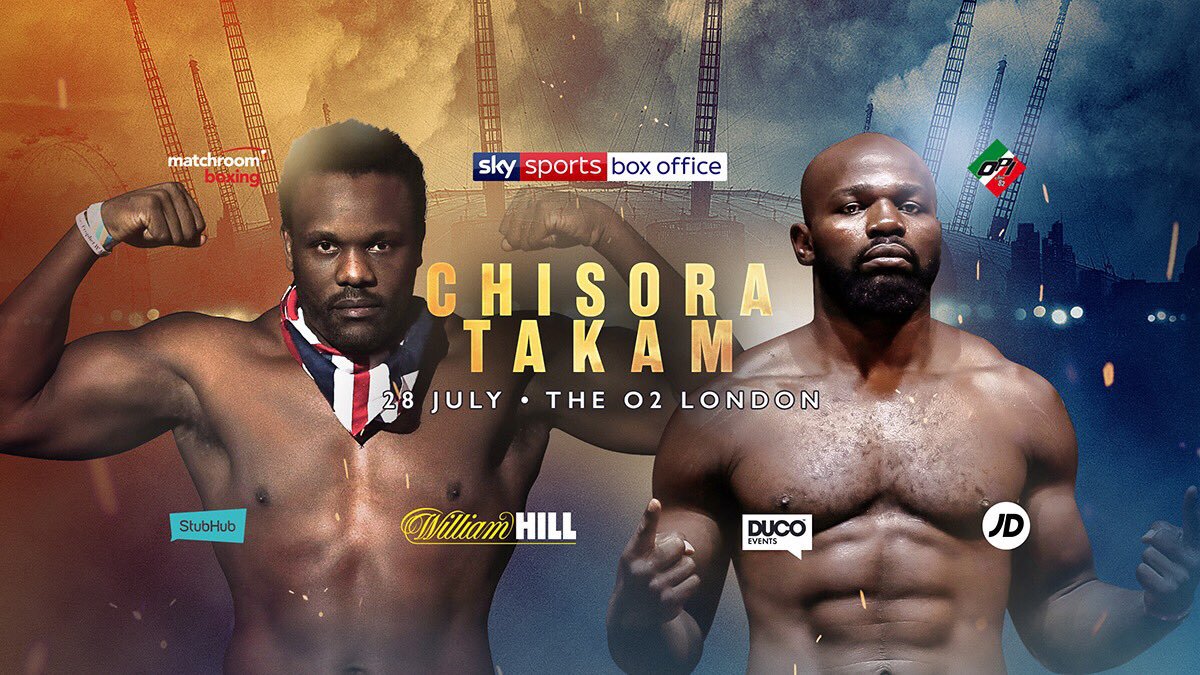 What he lacks in size, he more than makes up for with skill. Heavyweight contender Carlos Takam (35-4-1, 27 kos) is never an easy assignment for anyone.

It was close when he was controversially stopped by the referee against Joshua, close when he dropped a decision to Joseph Parker and also when he got clipped by Alexander Povetkin in the 10th round of a fight of the year contender.

But the post-Klitschko heavyweight scene is a crowded one at the top. With Dylian Whyte and Parker squaring off in what is perceived as an unofficial eliminator for a shot at Anthony Joshua. Deontay Wilder seemingly keeping safe on the other side of the pond and Tyson Fury back in the mix, how does the man from Cameroon via way of France climb his way to the highest prize in sport?

BB: Do you see the fight with Chisora as a distance fight or a stoppage affair?

CARLOS TAKAM: It will be what it has to be in order to win. However it’s going to turn out I can promise you it won’t be boring.

BB: Do you think Chisora still has something to offer at world level?

CT: He is still and always going to be a dangerous opponent for anyone. I rate him, not least because he is African like me, we have that fighting spirit. Also, you know what they say about heavyweight boxing: all it takes is one punch…

BB: Where do you see a victory over him leading you realistically in terms of opportunities?

CT: It’s premature to talk about opportunities. I am not looking past this fight.

BB: You are ranked at number 6 with the IBF and do not appear in the top 10 of any of the other 3 main sanctioning bodies. The number one spot is vacant and you have Pulev, Miller, Povetkin and Hughie Fury ahead of you. If you could pick one of them to fight next, who would it be?

CT: Whoever is willing to fight me. Although, I wouldn’t mind another go at Povetkin…

BB: Most people agree that the stoppage against Joshua was premature and your performance surely gained you the respect of the UK fans. Are you happy to be back in the UK?

CT: Very happy. And I know UK fans are happy too.

BB: As you shared a ring with both, who do you see prevailing between Joshua and Povetkin?

CT: I’m sick of answering that question… It’s starting to give me a headache only hearing it… Joshua by KO.

BB: And between Parker and Whyte?

CT: Common sense tells me Parker is going to win a decision but he has to be respectful of Whyte’s power. If it is Whyte to win, it will have to be by KO.

BB: Are Deontay Wilder or Tyson Fury on your radar at all? Did you ever have any contact with either camp?

CT: For sure. There was contact but nothing serious.

BB: Povetkin aside, who do you consider the toughest opponent you faced in your career?

CT: I will only answer that question after I retired.

CT: Thanks to anyone who will come to see the fight and for the support of the UK fans.