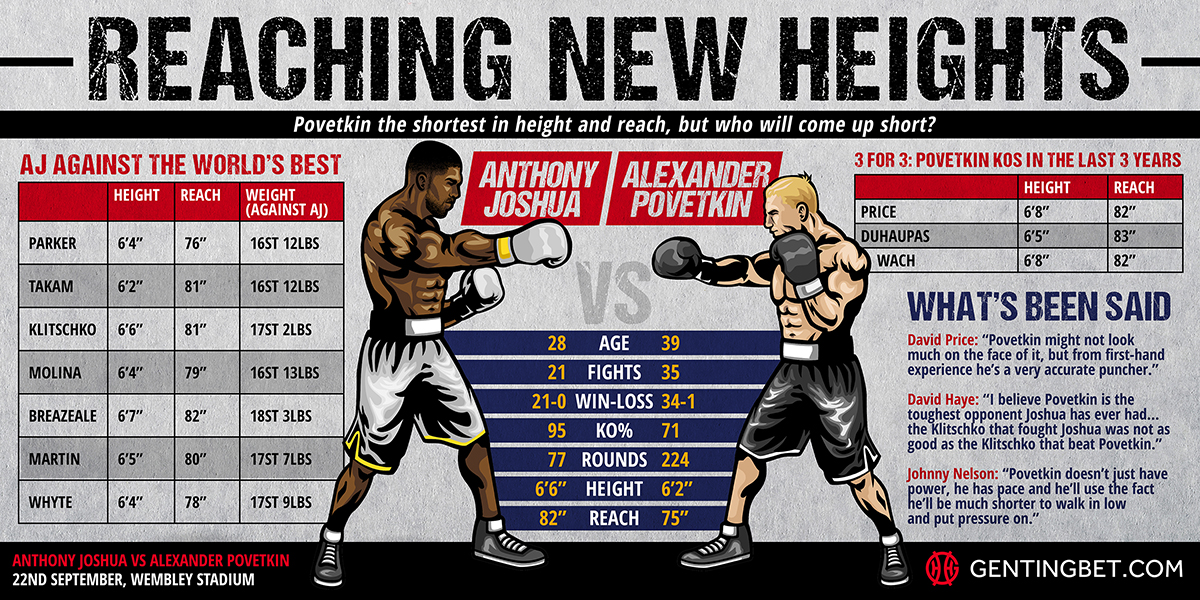 At one point it was looking increasingly likely that Anthony Joshua’s next fight was going to be the titanic clash against WBC champion Deontay Wilder he’s craved, but instead the 28-year-old faces mandatory challenger Alexander Povetkin at Wembley Stadium this weekend.
Four Titles on the Line
There appears to be no danger of Joshua taking 39-year-old challenger Povetkin lightly. After all, Povetkin is a fellow former Olympic gold super-heavyweight medal winner. Povetkin’s stunning knockout of David Price in his last ring action showcased just how dangerous his punching power can be. The Russian fighter has never been knocked out and has just one loss in his 35-fight career, at the hands of Wladimir Klitschko in his prime. This Saturday night Povetkin is seeking to take the four belts Joshua currently holds in front of a sell-out Wembley Stadium. GentingBet have analysed the main talking points heading into the fight.

Aim High
Standing at 6ft 2 and with a reach of just 75 inches, Povetkin is the shortest opponent AJ has faced in his young career. In 2013, the 13-year boxing veteran became the highest paid Russian in his sport when he fought Klitschko for a total purse that exceeded $23million. Povetkin will no doubt take inspiration from the difficulties Carlos Takam posed the 6ft 6-inch Joshua this time last year. 24 of Povetkin’s 34 victories have come via knockout and despite being the underdog heading into the fight, Povetkin to defeat AJ by KO is a tempting outside bet at 9/1. Given that Povetkin was puffing and panting before he found the knockout blow against Price, if the Russian is to pull off an upset at Wembley he’ll need to keep it well inside 12 rounds.

AJ Vulnerability
Joshua’s unblemished KO record came to an end in his last bout against Joseph Parker, showing that there are ways to make the Watford fighter go the full 12 rounds, despite the devastating punching power he possesses. Povetkin, whilst giving up seven inches in reach and four inches in stature, has become accustomed to fighting taller men like Joshua his whole career. Analysing how both men got on against Klitschko appears to suggest that Povetkin should lean on his jab to cause damage to Joshua. Klitschko landed a surprising 42% of his jabs on Joshua, so if Povetkin can use his quick feet to get inside AJ’s defence to land some of his signature power punches he can cause problems.
Povetkin is considered by many to be the toughest test Joshua has faced to date. Anything but his best and it could be a tricky night for the champion. With Povetkin’s solid chin, you may want to look at Anthony Joshua to win on points at 7/2, which represents decent value.