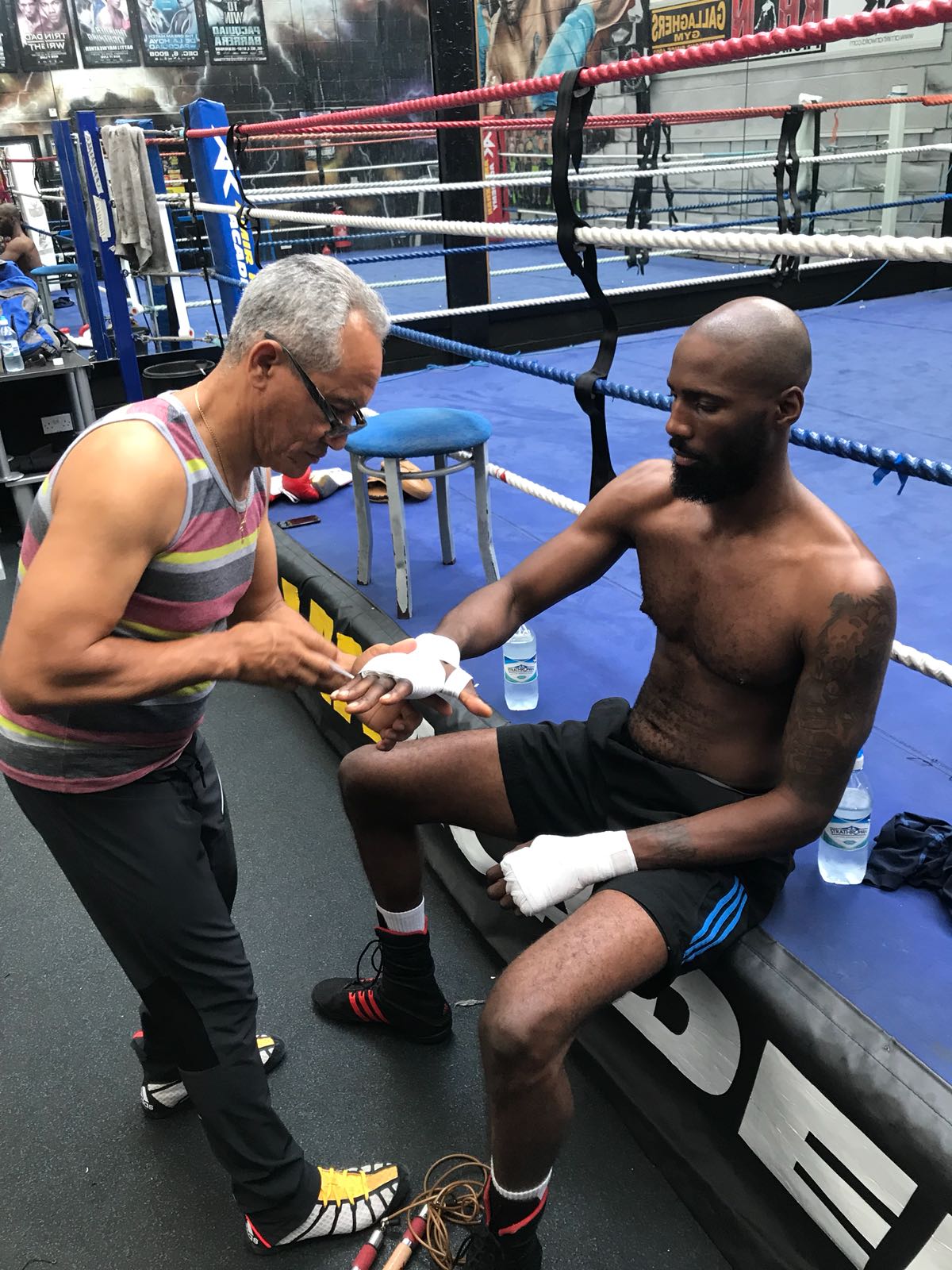 Markus Williams with coach Jorge Rubio
Light-heavyweight Markus Williams has spoken of his unique mindset that led him away from the football pitch and into the boxing gym as a young man.
The 29-year-old who is currently unbeaten in three outings with one coming inside the scheduled distance is trained by the world-reknownd Hall of Famer coach Jorge Rubio alongside Angel Fernandez.
Williams stopped Istvan Ostoros earlier this year after a two-year break from the sport in which impressive wins over Mitch Mitchell and Curtis Gargano gave him an encouraging start in the paid ranks.
And the Londoner, who started boxing at the age of 12, admits that the solo attitude his has possessed for years was able to come to fruition in the squared circle.
“I started boxing so I could learn how to defend and protect myself, but I fell in the love with the sport because of the individual aspect,” Williams told British Boxers.
“It would always annoy me in other sports that in a team one persons weakness can lead to you all losing.
“But in the ring there is no one in there dragging you down, it’s all on you. I never told anyone I was going to start boxing though.
“I was just so done with the team mentality, I just didn’t get it so I just turned up and the gym one day and was like I am here to fight.
As a fighter who admits he appreciates the skillset of former World Champion Guillermo Rigondeaux, being trained by the Cuban’s former coach in Rubio, he is beginning to understand the importance of building the right team.
“I had always been a huge admirer of Jorge’s style since I saw him work with Rigondeaux,” he continued.
“The minute I got the opportunity to work with him I jumped at it, he’s a very passionate man with a warrior’s mentality and that suits me perfectly.
“His apprentice Angel Fernandez is worth his weight in gold too. Since we have started working together I have no complaints. He has a champion trainer’s mentality and it speaks to my spirit.
“I only think you need to look at Floyd Mayweather and TMT to see how important it is to have everyone in their role doing the right job.
“I have my S&C coach Alex Stott who works with some of the best athletes about, put that together with Jorge and Angel it all is coming together well.”
You can follow Markus on social media. He is on Instagram: @Themerciless_boxer, Facebook: Markus Williams and Twitter: @MercilessMarkus
By The Boxing Kid