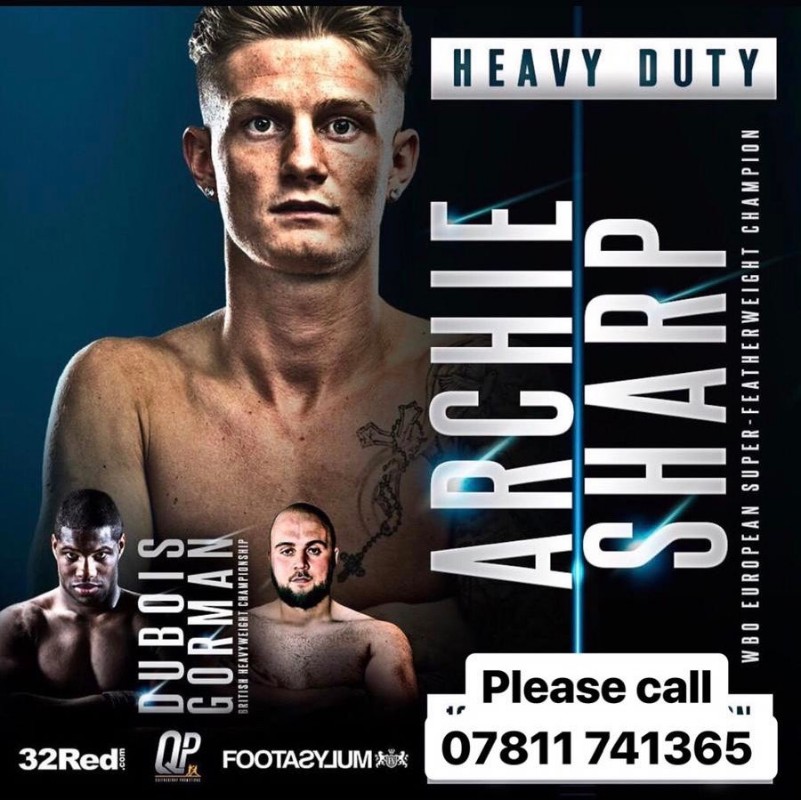 “I will keep pushing to get the Herring fight by the end of the year.”

According to Muhammad Ali, champions must have skill and will but the will must be stronger than the skill. The 24 years old “Sharpshooter” has learned to apply his will to his natural skills and at this time seems to be slightly ahead of the rest of the pack in the purchase of world honours as newly crowned American WBO champion Jamel Herring has loosely mentioned in the build up to his title fight the possibility of a voluntary defence against him.

Ahead of his appearance on the July 13 Warren’s “Heavy Duties” card at the O2 Arena, WBO no. 10 ranked Sharp is very much determined to make sure Herring keeps his word.

BB: How did you get into boxing and what lead you to the pros?

AS: I have been into sports as far as I can remember. My dad and my uncle used to box and took me to the local gym when I was seven. I obviously enjoyed it as I went on to have 60 fights as an Amateur with 55 wins, including 6 National titles and Gold medals in the Three Nations, England, Ireland and European tournaments. My dream was to become an Olympic champion but it did not work for me in the Senior ABAs. Decisions I know I deserved did not go my way and I got disgusted with the politics, so I decided to turn pro.

BB: What are your biggest assets as a professional?

AS: I have total belief in myself and my ring IQ is much better than most fighters out there. The point of the game is to hit without getting hit. Well, that is my specialty and the reason why I will last very long in this sport.

BB: Are those natural gifts or the result of years of practice?

AS: A combination of the two. I was not fully aware of my potential until 3 years ago. It was all there, I just didn’t really see it. When I turned pro, people around me pointed out how easily certain things were coming to me. My footwork, the head movement, switching guard… It all came natural. Still, I am far from the finished article and learning every day.

BB: Do you enter the ring with a strategy or rely exclusively on your talent?

AS: My trainer Richard Sawyer does research on the opponents and comes up with a plan and I trust him blindly. But, what you prepare for might not always be what the other guy will bring to the table on the night. A good champion should be able to adapt to anything, so I keep an open mind. I watched about 30 seconds to 1 minute of Woodstock’s footage as I did not want to enter the ring expecting a specific style. I always train for all possible scenarios.

BB: Prior to that fight, you expressed your belief that fighters like Woodstock and Zelfa Barrett progress because of their use (or abuse) of social media and trash talking. After you beat Lyon comprehensively and stopped common opponent Gonzales who lasted the distance with him, how do you feel about him and Barrett getting a Commonwealth title shot while your next opponent has yet to be announced?

AS: It is what it is. I am not aware of how that fight was made but it does not matter now that Herring mentioned the possibility of a voluntary defence against me. That opened a completely different trajectory. By the way, it has not been announced but for my next fight we are in talks with Jordan McCorry who is coming off a British title challenge against Sam Bowen.

BB: Does that mean you are no longer interested in fighting Bowen yourself for the British title?

AS: I am still interested but he has a mandatory against Anthony Cacace and I think Cacace beats him. So, if I don’t get the world title shot I will happily fight against the new champion.

BB: What about Lee Selby, whom you also named as potential target?

AS: That was a fight I wanted to prove my actual level as he is a former World champion and a great fighter. I needed him to access the world scene but now that I have a foot in the door I will keep pushing to get the Herring fight by the end of the year.

BB: Throughout the years, Frank Warren has often been criticised by his detractors for allegedly over-protecting his fighters but as of late he has made some risky match-ups when putting Fury against Wilder 3 fights into his comeback, Yarde with Kovalev and may be you against Herring. How do you feel about this type of matchmaking?

AS: It’s obvious to me that he pushes his fighters when he has faith in them and fancies their chances to win. If he sees that in me, then I am grateful because I have absolutely no doubt I can pull it off. The better the opponent, the better the Archie Sharp you see.

BB: Dubois vs Gorman is another interesting match-up. Who do you pick?

AS: I believe Gorman might be able to nick it with his elusiveness. If he sticks to his boxing for 12 rounds, which I believe he can do, then he wins on points.

BB: Reportedly, you struggled with mental health issues in the past. Were they in any way related to your profession? And how did you overcome them?

AS: When I didn’t achieve what I wanted towards the end of my Amateurs career, it messed me up a bit to be honest. I wasn’t in a good place as I believed I wasn’t good enough. I felt depressed. Thanks to the help of a mind coach, I was able to move the focus on what I did actually achieve rather than what I didn’t. I learned to train my mind the same way I do my body. Positive thoughts are the equivalent for the mind of healthy food and exercise for the body. And they both are instruments of which I am in control, not vice versa. I am feeling in the best place ever now.

BB: Anything else you want to add or share?

AS: Thanks to everyone that supported me so far, especially my trainer Richard Sawyer, my management at MTK, my promoter Frank Warren and my mind coach Linda Keen. You can follow me on Instagram as @archie_sharp an