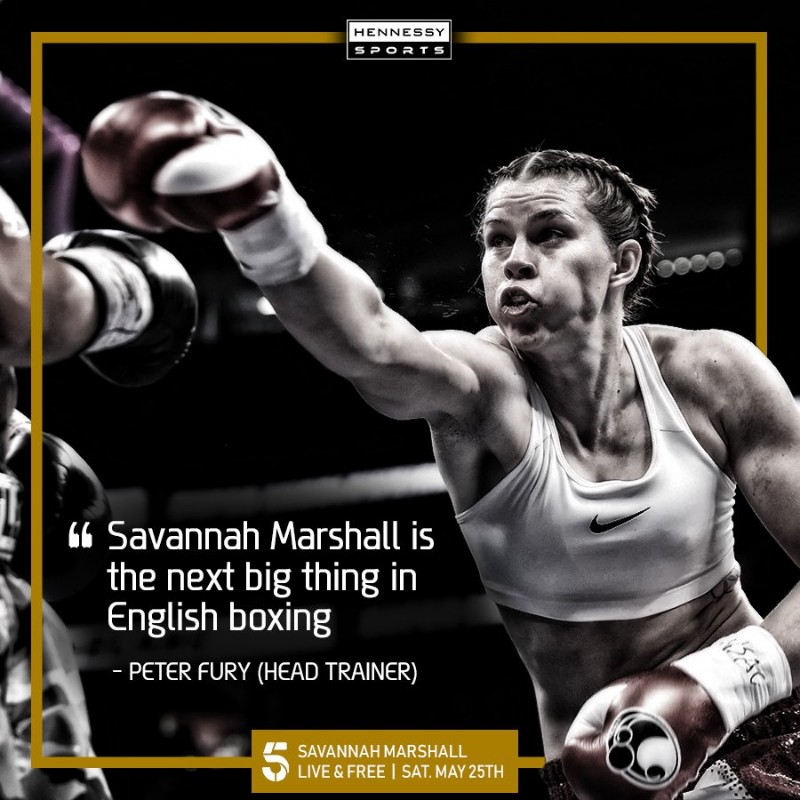 They used to call her “The Silent Assassin” in the Amateurs because she was shy and didn’t enjoy being interviewed. Many years later, the moniker still applies but for different reasons. Super Middleweight Savannah Marshall (5-0, 3 KOs) is very smart, very confident and knows exactly what she wants. Only, she is not a diva. She knows when it’s better to keep her cards close to her chest and when she speaks she doesn’t use a word more than necessary. She is a fighter and her job is done in the ring. The rest just comes with the territory. Ahead of her next bout against a yet to be announced opponent on the Hennessy Sports Hughie Fury’s card in Manchester on May 25th, The Assassin broke her silence to speak with British Boxers.

BB: Reportedly, you were not interested in the Pro game at the time you competed in the World Amateur Championship and the Olympics. What made you change your mind?

SM: The fact I didn’t get the Gold in the Olympics left me feeling still hungry for the sport, although I was not thinking about turning pro honestly. When Mayweather Promotions came out with an offer out of the blue, it just clicked. I had nothing to lose and the timing was right.

BB: Why the split with them, then?

SM: It was a mutual decision and on good terms. It just wasn’t for me. That’s all I can say about it.

BB: How did you end up with Peter Fury?

SM: I had already trained with him before I even turned pro and I enjoyed it. It made me fall in love with the sport again. When I came back from America I was determined to go on and I went straight back and asked him to train me. And as a consequence I joined Hennessy Sports.

BB: What makes him a good trainer, in your opinion?

SM: I enjoy what he teaches and the way he explains it. We clicked both on personal and professional level. I grew to really respect Peter Fury. He enhanced my confidence exponentially.

BB: What improvements have you made under his guidance?

SM: I am totally changed as a fighter. My footwork has way more angles and I turned into a switch-hitter, which I never thought possible before. He really integrated that into me.

BB: You are the only fighter in the world to hold a win over undisputed Middleweight champion Claressa Shields (9-0, 2 KOs), although back in the Amateurs. How did you do it?

SM: I was just the better all round boxer on the day. But that was then. We both improved and it would be a different fight this time. I still win, though.

SM: If I told you the plan, someone else would do it before I get the chance. Peter, my parents and me are the only people in the world to know it.

BB: What was your pick before her fight against Christina Hammer and how do you assess Claressa’s performance?

SM: I picked Christina to win. I am not sure if the occasion got to her but she just wasn’t being herself. Claressa was brilliant, the best she has ever boxed. She made herself proud. I was really impressed. Although Hammer not performing had a lot to do with it.

BB: Shields called you out immediately after the fight and said she is going to kill you. Metaphorically, obviously. What is your direct reply to her challenge?

SM: I think it’s significant that I am the one she called out after the biggest win of her career. I’m only 5-0 and boxed no one famous. She has an issue with me, not vice versa. Claressa, do I make you feel threatened?

BB: Was there any serious contact or offer from her camp?

SM: Nothing at all.

BB: Would you be ready to fight her now?

SM: She overtook me in experience at this point. She headlined in bigger shows against better opposition. I am still learning my trade as a pro. I am not on a hurry but I will not leave it too long either. I have other things I want to do with my life after boxing. Whenever Peter says I’m ready, we go.

BB: She has also been calling out male fighters like GGG and Thurman. Is it realistically possible for a female fighter to fight a man if they’re at the same weight?

SM: Of course not. I spar male Middleweights and I can feel the difference. Men and women are built differently. There is too much difference in strength and power.

BB: Who is the best female fighter pound for pound in your opinion?

SM: Cecilia Braekhus being past her prime, I’d say Claressa and Katie Taylor.

BB: In conclusion, do you still recognise yourself in the Silent Assassin moniker?

SM: Well, it’s catchy, isn’t it? But Pro boxing nowadays is actually done more outside the ring than inside, especially on social media, and I am adapting to that.