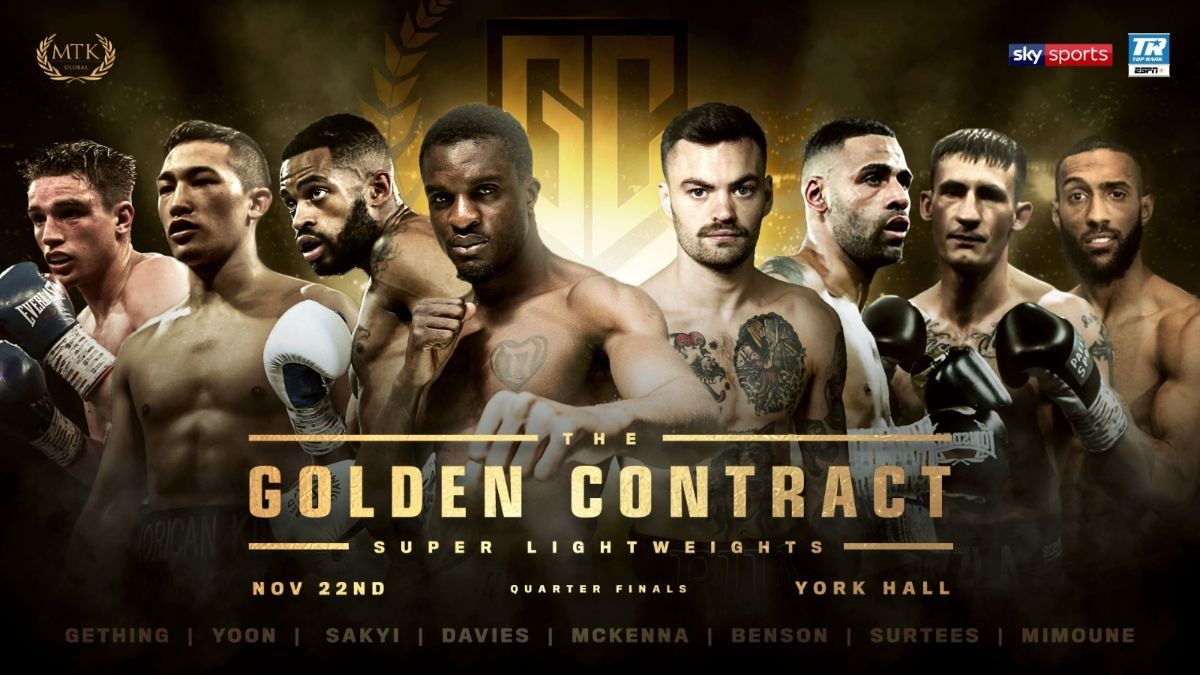 Friday night saw the commencing of MTK’s Golden Contract super-lightweight tournament, with Ohara Davies (20-2, 15 KOs) earning a seventh round stoppage over Logan Yoon (16-1, 12 KOs), to ensure his place in the semi-final.

In the first half of the contest, the tough Hawaiian had moments of success, moving well against Davies who seemed content and calculated waiting for his moment to pounce.

As the bout grew into the latter stages, the Londoner took the ascendancy, forcing Yoon to soak up a plethora of powerful punches as his face became increasingly marked up.

A dominant seventh round topped off an impressive performance from Davies, as he marched forward and found success with forceful shots, causing Yoon’s corner to save their fighter from anymore punishment at the end of the round.

The durable Sakyi seemed to have hurt his opponent in the second round landing a strong left hook to the body, as the fight was fought at close range for opening six minutes. However, once McKenna smartly reverted to maximising his reach advantage he took control, utilising his expansive arsenal of shots to ease to his fourth consecutive victory.

Following the contest, McKenna told Sky Sports: “I enjoyed it. I think it is the first fight I’ve ever had without a cut. I stuck to the instructions and kept him at range for most of the time. he is very strong and slick but I think I controlled it.

“I’m usually in a war, but today I boxed and kept him at range. He is very heavy handed. He caught me in the second. It was a lovely body shot. I didn’t want to go down as it would give him momentum. I could have gone down, but I didn’t. Us Irish are made of steel.”

In a fight that highlights what’s great about the Golden Contract format, the classy Mohamed Mimoune (23-3, 3 KOs) came off the canvas to hand the brave Darren Surtees (12-1, 8 KOs) his first defeat.

Surtees started with authority, taking the center of the ring and dropping the former European welterweight champion with a thudding right hand in the second round.

Nonetheless, the Frenchman recovered well and stepped on the front foot to eventually stop Surtees with a slick combination in the fifth round.

The absorbing contest and the ability he showed to come back from adversity underlines why many are picking Mimoune to go on and win the competition.

The opening fight saw late replacement Jeff Ofori (10-1-1, 3 KOs) and Kieran Gething (9-2-2, 2 KOs) battled to a split-decision draw, before referee Kieran McCann was given the deciding call on the contest and deemed that Ofori would progress.

The Londoner manager to neutralise Gething’s significant reach advantage and outwork his opponent on the inside, perhaps tipping the tight contest in his favour.

The win marks the second time Ofori has had his hand raised in two weeks after he ended the undefeated record of Ged Carroll in Liverpool last weekend.

The semi-finals are set to take place in the opening months of 2020.