Dilmaghani vs Fonseca Grudge Fight is BACK ON! With a WORLD TITLE on the line 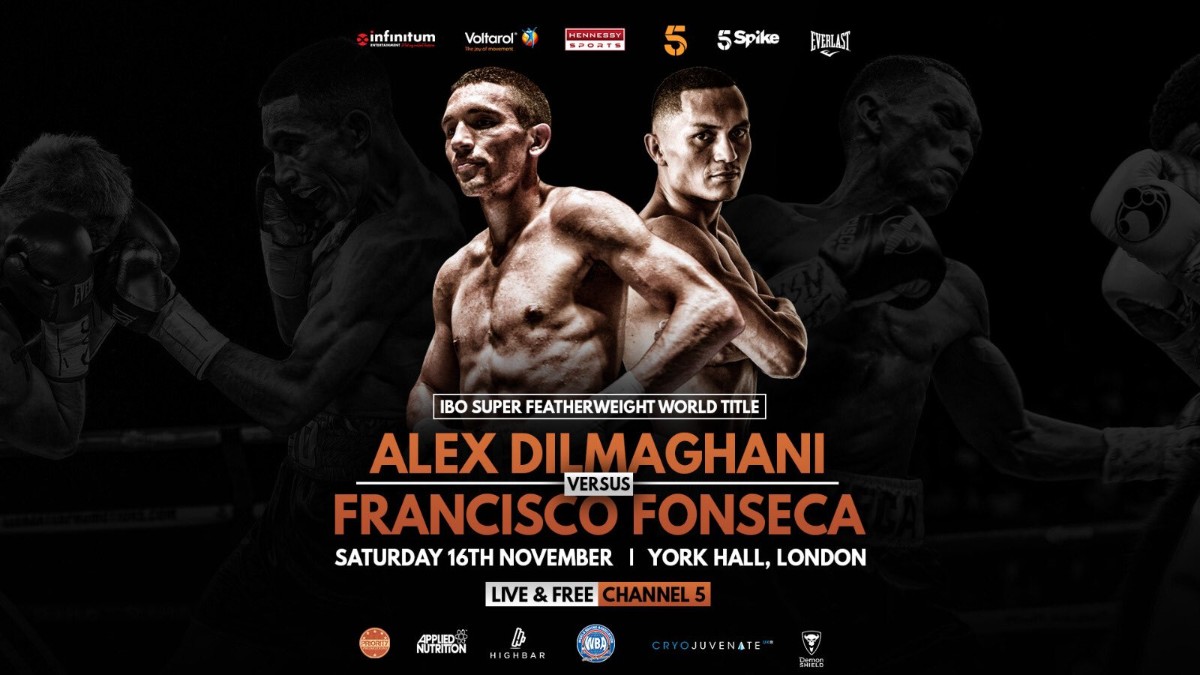 The IBO World title is now on the line for the rescheduled clash on Saturday 16th November at the York Hall, live on Channel 5.

London, UK (18 October 2019) Hennessy Sports are delighted to announce that the salivating super-featherweight shootout between Alex Dilmaghani and Francisco Fonseca is back on!

Promoted by Mick Hennessy in association with Infinitum, Channel 5 and Mo Prior of Priority Promotions, Dilmaghani v Fonseca will be televised exclusively live in the UK on free-to-air Channel 5 and 5Spike.

Initially, the potent pair were primed to punch it out at the Bolton Whites Hotel late last month, only for Two-Time World title challenger Fonseca to fall ill prior to the ringwalk. On the advice of the doctors, Mick Hennessy had to make a compassionate call to pull the main event at the last minute and allow Fonseca to recover fully and reschedule for a later date.

But given the quality of this mouthwatering match-up, it was always going to be a case of better seven weeks late than not at all.

Dazzler ‘Dilma’, who enters on an incredible eight and a half year unbeaten streak and who earned lavish plaudits when he returned to Britain from a five-fight exile in North America, to slaughter Slovakian hard case Martin Parlagi in eight at Manchester’s Victoria Warehouse in late May, finally faces the litmus test he has long coveted.

Two-time IBF World class title challenger Fonseca – from the nation that delivered ring legends Alexis Arguello, Ricardo Mayorga and ‘Chocolatito’ Gonzalez – has been bettered just twice in a 28 fight pro career and has sent 19 of his 25 victims for an early shower. Still only 25, the lethal Latino harbours big world title aspirations in his third world title attempt. It is a genuine world grade match-up.

The magic man from Mullingar won European gold (2013, Minsk) and Olympic silver (London 2012) in the singlet, and has racked up a perfect 13 fight slate since entering the paid brigade in March 2014, sizzling in rings on the US East Coast as well as Ireland and mainland Britain. However, already 30, this mercurial talent needs to roll the dice if he’s to replicate past achievements as a pro.

Victory over Fonseca the Elder will provide Nevin with a short-cut to the major world titles but the savage Central American – world ranked until recently – has lost just four of 32 and 18 stoppage victories suggest he is a serious puncher. It’s certainly no formality.

Promoter Hennessy’s son, Michael Hennessy Jr, an all action, fast-rising, middleweight talent who is undefeated in three, features in a six rounder in what promises to be an unmissable fight night.

Mick Hennessy, CEO of Hennessy Sports, said, “I’m extremely pleased and relieved to finally to see this exciting match up back on and can’t wait to see Alex and Francisco get it on in the ring, I’m sure everyone will agree that it was a fight worth waiting for.  Of course, it was very disappointing last time round that it had be cancelled at the very last minute, but we’ve battled hard to ensure that the fight remained on and will now headline at London’s famous and historic York Hall with the IBO World title on the line.  A great chief supporting title fight on the card sees Irish talent John Joe Nevin take on Francisco’s brother Freddy, they will be determined coming to London to make it a double family victory. With a great undercard also, this is a real fight card coming to the home of London boxing.”