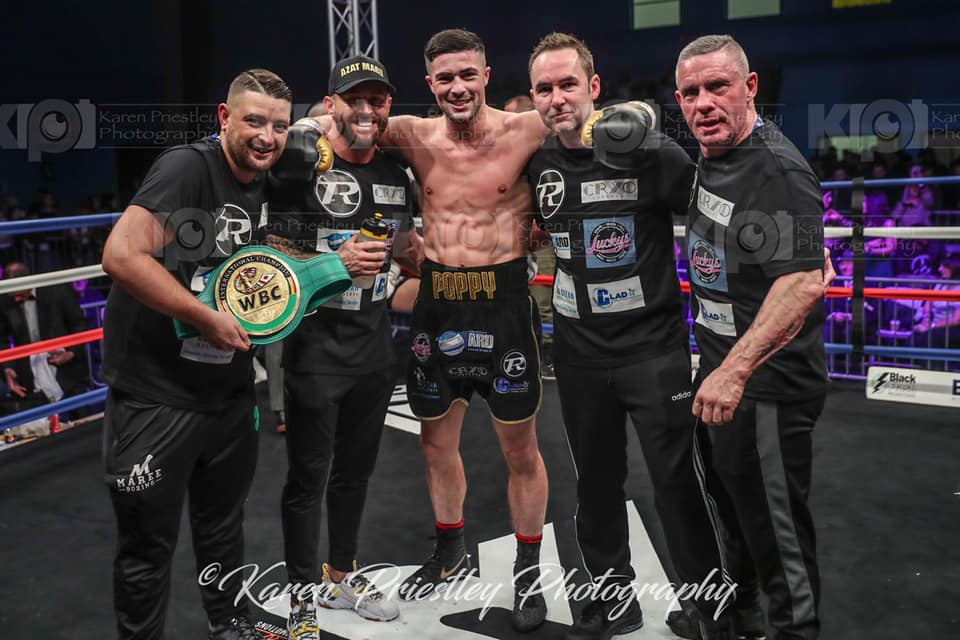 At 80 years of age and approaching the winter of my life I find I am enjoying my beloved sport as much as when I was a bright eyed youngster. The years seem to shed off me when I’m around boxing and boxing people.

The shows are usually late and my bedtime these days is 7:30 pm, but when it’s fight night I am young again! No tiredness just anticipation of a wonderful night and what a night of boxing Black Flash Promotions put on Saturday night in Oldham, showcasing up and coming talented pros.

I’d also like to mention the wonderful sporting fans in attendance, who were very respectful to all boxers competing home and away and came out in numbers to give their boxers support.

The show opened with a lively four round contest as Belfast’s Matthew Fitzsimmons gained a 39-37 verdict over Blackpool’s Ed Harrison. Fitzsimmons showed some nice moves and good combinations, Harrison was not idle but Matthew held the edge in a fitting start to the show.

Next up was a four rounder in which Spain’s Alexander Zeldon proved he had not come to make the numbers up, by gaining a 39-38 points win over Manchester’s Dan Booth.

Zeldon was all business and showed displayed quality footwork and lateral movement. Booth had his moments but this was Alexander’s night and he just about nicked the verdict in a cracking contest.

Manchester’s Jack Rafferty from the illustrious Ancoats gym, ‘The Finest’ home of former world champion Terry ‘Turbo’ Flanagan, was involved in a real scrap with rock hard ponytailed Mexican Ismail Molina in the fight of the night.

After a non-stop battle over six rounds, Rafferty received a 60 – 54 verdict, however the score did not reflect the closeness of the bout, as the Manchester fighter had to battle tooth and nail for every point. Rafferty was able to deliver some lovely movement and top class combinations to head and body and never stopped engaging.

Rafferty needed all his skill to keep ahead of his rival, who had come to take the home boy’s unbeaten record. Molina was full of aggression and scored to head and body himself, keeping Rafferty thinking and digging deep. The pace was breathtaking and the crowd gave both boxers a rousing ovation at the end of their epic contest.

Speaking to Jack’s coach Steve Maylett afterwards, he said his charge will have learnt a lot in the bout. No doubt about that! Rafferty can have a bright future in boxing if he continues on his path.

Manchester’s Connor Ward gained a 40 – 36 verdict over Sheffield’s Qasim Hussain in an entertaining four rounder. I was impressed with Ward’s variety of punches and poise against a veteran journeyman, who definitely knows his way around the ring.

Hussain was doing his best to frustrate the Mancunian into making mistakes, but Ward showed maturity by working off the jab and not falling for any of Hussain’s traps to emerge a good winner in an enjoyable bout. I predict a champion in the making, if he stays grounded and listens and learns from his world class trainer Pat Barrett.

Another Black Flash Barrett trained prospect and again potential championship material is slick, hard hitting super-featherweight Connor Burton, who like Ward, is from the famous Collyhurst and Moston Gym. On the night he was in devastating form and didn’t hang around, stopping Nabil Ahmed in the second round.

Burton was all business showcasing a variety of punches and the balance of a natural athlete, his switch hitting and lateral movement has to be seen to be believed. His jabbing by either hand is not range finding but hard and fast all combinations are thick and fast off either lead.

Fair play to Nabil, he did his best and tried to stem the storm, however Burton was in full flow and after the second trip to the canvas the referee made a very timely stoppage.

Next up was Halifax’s Javril Bilal who picked up a 40-36 verdict over Bolton’s Chris Jenkins.

Bilal showed a good left lead and let his punches go to head and body as he grew into the fight, Jenkins showed clever defensive moves and made sure that Bilal had to work for his win.

Manchester’s Sean Fennell was the victor in a pleasing contest against Dean Jones 59-55. He showed nice footwork, good clever defensive work and impressive combinations off his jab. Jones was quite at ease to block, parry and cover up as well as coming back with punches of his own when able.

The Manchester prospect kept to his boxing no matter what Jones tried to frustrate him, to earn a merited verdict. Along with Connor Burton and Connor Ward, Fennell has a promising future in his chosen sport.

Manchester’s Rob Parry and Andy Bishop engaged in a pleasing to and fro bout, full of endeavour with debuting Parry gaining a 39-36 verdict.

This bout also had the supporters giving great vocal support in a contest when both participants gave their all.

In the Main Event: Oldhams Mark Heffron was in devastating form, stopping Ondrea Budera in the first round. Heffron just exploded, there was no feeling out period, he just went out like a one man demolition job. Poor Budera just did not have a chance the left jab went to the head the dynamic right followed and Budera was down.

Heffron had to be pulled off him and received a lecture off the ref, but on resumption he unleashed a volley of punches the towel flew in from Budera’s corner and the referee dispensed with the count while he received medical attention.

So ended a wonderful night’s entertainment. The last three small shows I have attended have been exceptional the VIP Promotion show at Ellesmere Port, Kieran Farrell and Joe Gallagher’s M22 show at Wythenshawe and now this, and the sportsmanship of the fans at all shows is be admired. Thank you all for making an old man happy.