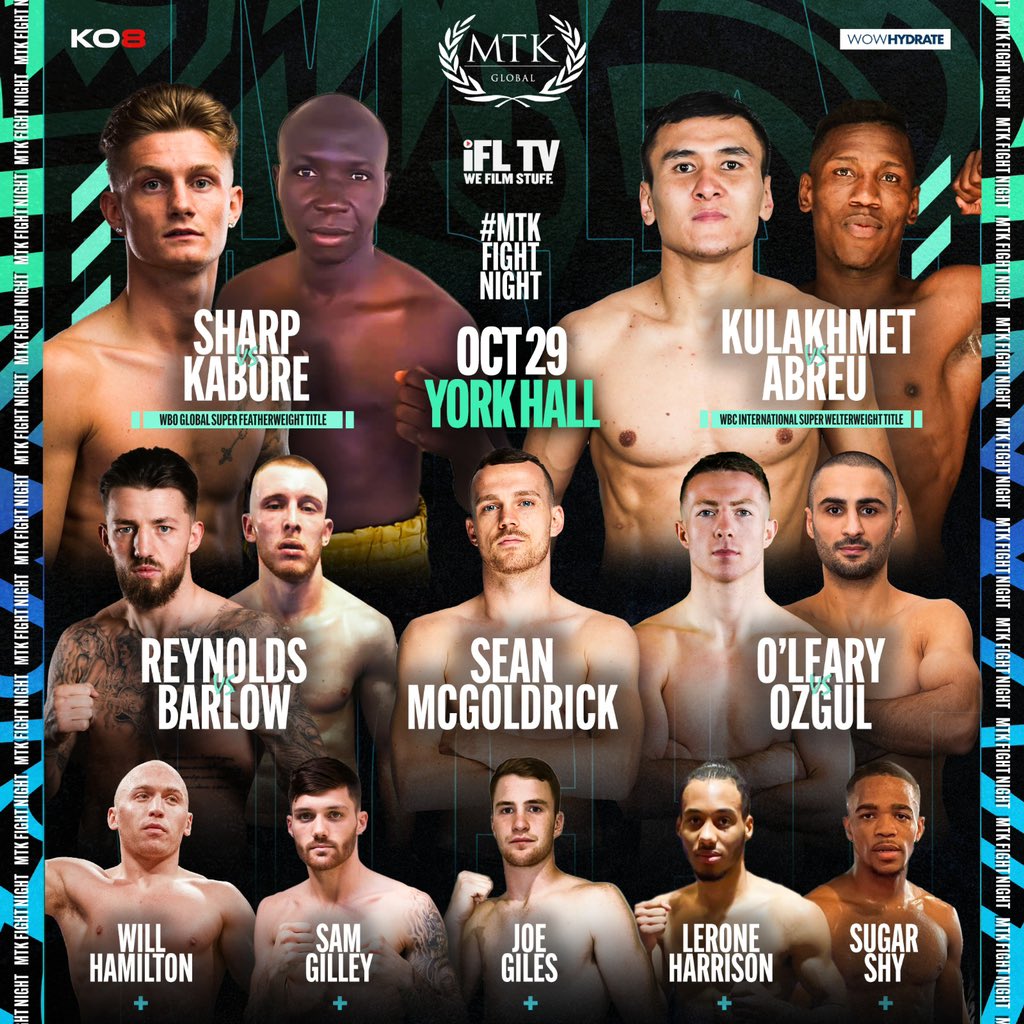 MTK head to York Hall on Friday 29th October with a blossoming stable poised to excite a packed London crowd.

Archie Sharp (20-0-0) meets Alexis Boureima Kabore (28-4-0) in a clash for the WBO Global Super Feather title. Sharp fought last in July, beating Diego Andrade Chavez over ten rounds and will aim to continue his rise up the rankings.

The man from Welling’s will aim to improve on his most recent performance at York Hall where he laboured to a narrow win against Jeff Ofori. Kabore has fought rarely outside his native Burkina Faso and will make his first trip to the UK capital.

Kabore’s most notable experience came in a 12 round defeat to Rey Vargas in 2016 in Mexico City. He will be someone against which Sharp will look to impress.

MTK introduce Tursynbay Kulakhmet (4-0-0) to the London crown and the Kazakh looks a man in a hurry. All four of his opponents so far have had winning records and the super-welterweight is making the second defence of his WBC International Super-Welterweight title.

Kulakhmet is training with Jamie Moore and Nigel Travis in Manchester, something he has described as ‘special’. A decorated amateur Kulakhmet beat Israil Madrimov (7-0-0) in those ranks and has a World Games bronze to add to a Youth Asia title.

Juan Carlos Abreu (23-6-0) is the opponent, one who comes with impressive pro experience. His last fight was in September 2020 when he was stopped in the sixth by Jaron Ennis and he fought Egidijus Kavaliauskas (22-2-1) and Alexander Besputin (15-0-0) in 2018. It takes a good fighter to beat him and an impressive win for Kulakhmet would be an early statement.

Jordan Reynolds (2-0-0) has been out twice in 2021 so far as he looks to make up for a lost 2020. The man from Luton signed with MTK just before the pandemic but has exploded out the traps this year. Reynolds’ back story is fascinating, an England captain, GB stalwart the ‘Wanderer’ has trained in a number of gyms throughout the UK and Ireland.

He will take on unbeaten Randal Barlow (2-0-0) at middleweight.

Walthamstow’s Sam Gilley (9-1-0) has made the move to super-welterweight and will hope to get over his first professional defeat. Gilley lost a tight decision to Danny Ball (10-1-1) in March and has been sparring all the best in the British welter and super-welterweight division.

Daniel Lartey boasts 12 stoppages in 14 wins (14-5-1) and will pose a decent test for Gilley. The Ghanaian was stopped by Jack Rafferty in September (16-0-0) but will hope to upset the home favourite.

Sean McGoldrick (10-1-0) returns after almost 18 months out the ring and will take on Stephen Jackson (1-4-0). McGoldrick will aim to kick on a career that showed good early promise but was slowed down by the 2019 defeat to Thomas Essomba (10-7-1). Training with Jamie Moore, the two time Commonwealth Games medallist has used the timeout to work on some things in the gym.

O’Leary on the march

Pierce ‘Big Bang’ O’Leary (7-0-0) looks to continue his impressive rise up the Super-lightweight rankings. The 21-year-old Irishman faces Siar Ozgul (15-6-0) of Turkey, a man who has lost his last four fights in the UK. Ozgul has faced decent opposition including Viktor Postol in 2018.

Cruiserweight Will Hamilton (2-0-0) returns to the venue of his professional debut a year after his last fight. The London man takes on Ivo Zednicek (2-7-0) of the Czech Republic.