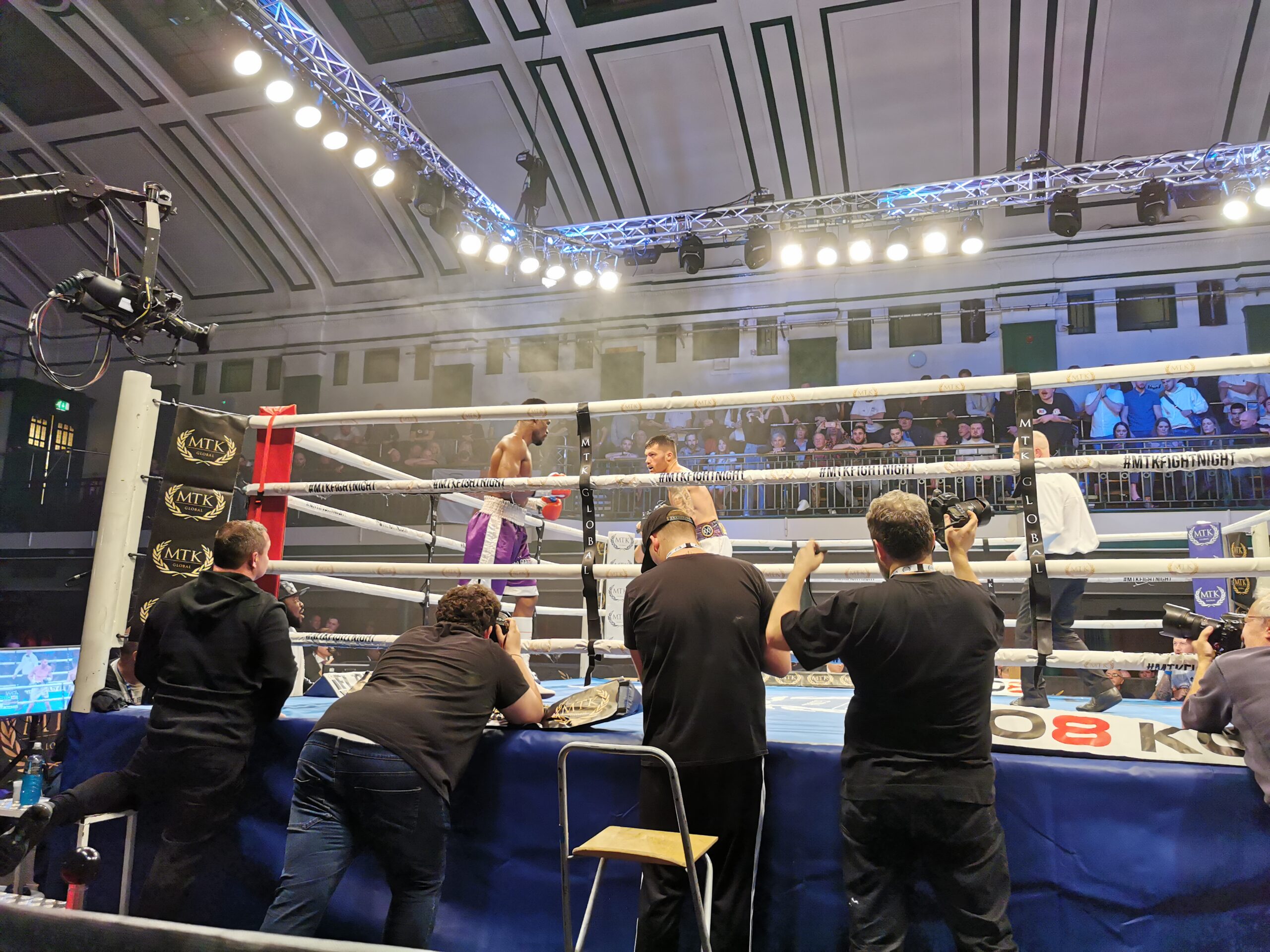 Juan Carlos Abreu weathered a second round knockdown to stop Tursynby Kulakhmet for the WBC International super-middleweight title in a night of top class boxing at York Hall.

Elsewhere on the card there were comfortable wins for Archie Sharp, Sean McGoldrick and Sam Gilley with explosive finishes for Will Hamilton, Pierce O’Leary, Jordan Reynolds and Shiloh Defreitas on debut.

Wins for Joe Giles and Lerone Harrison in their first professional bouts rounded out a night of well-matched boxing.

Tursynby Kulakhmet came to York Hall a man on a mission and exploded out the traps in defence of his WBC International title. The Kazakhstani, trained by Jamie Moore and Nigel Travis, took shots but got the better of the early exchanges and had Juan Carlos Abreu on the floor in round two.

Abreu, an experienced campaigner whose last fight was against Jaron Ennis, was keen to point out it was more of a trip than a solid left, acrobatically flipping to his feet.

Cut above his right eye in the fourth the Dominican was bleeding badly but was undeterred and it was in the seventh that he finally turned the screw.

Dropping Kulakhmet midway through the round Abreu sensed his opportunity, stopping him shortly after. A game and talented boxer, Abreu’s emotions when the ref waived off the contest were clear to see.

The outcome was clear early on in the fight as the man from Burkina Faso grew frustrated at Sharp’s slick movement and ring craft. Whilst he did all required Sharp will know better will be needed if he is to challenge the best in the world. Sharp maintains it is Shakur Stevenson he wants.

Fan favourite Jordan Reynolds looked a class above Rodolfo Paterno right from the opening bell. The late replacement Paterno looked uncomfortable from the off and was stopped after a vicious left hand midway into the first.

Reynolds will know greater challenge awaits but should be pleased with a clinical display in his third fight this year.

Welshman Sean McGoldrick was pleased to get the rounds on a return to the ring after 18 months out. A competitive fight against Stephen Jackson will have served some value even if McGoldrick was rarely hurt.

Sam Gilley did well on his first fight at middleweight, making light work of a teak-tough Daniel Lartey. The six rounds will have been good work for the Walthamstow man hoping to carry his power in a new division.

Pierce O’Leary did what Viktor Postol couldn’t and stopped Siar Ozgul in the seventh round.

O’Leary hurt his opponent early on and gradually broke him down,opening a cut below the left eye of Ozgul in the sixth. When he stopped the Turk in the seventh it was just rewards for a clean and impressive display of boxing.

Shiloh Defreitas is one to watch

Shiloh Defreitas made a fast start to his professional career with a raucous backing in York Hall. The Youth Commonwealth champion is a classy operator and pummeled Fonz Alexander in four punishing rounds.

Defreitas showed impressive patience on debut. When Alexander failed to make the count late into the fourth it rounded out a promising start.

Will Hamilton stops Zednicek within a round

Will Hamilton is a cruiserweight on a mission, moving to 3-0 after making light work of Ivo Zednicek. A first round stoppage for Hamilton is even better than Dan Azeez managed in his latest contest (Azeez stopped him in three).

One to watch for sure but blink and you’ll miss him.

Also on the card were good wins for debutants Joe Giles and Lerone Harrison.

Giles won all four rounds against Paval Garaj in a super-middleweight match up. Garaj has gone the distance with Denzel Bentley, Bradley Rea and Linus Udofia, each time well into their respective careers. It is a good start for Giles who will hope to build on the momentum.

Lerone Harrison faced a game Simas Volosinas who belied his losing record by constantly wishing to engage. Harrison took some shots but always had the better of the work in a competitive four rounder. The lightweight, trained by Jamie Moore will be one to watch over the coming year.