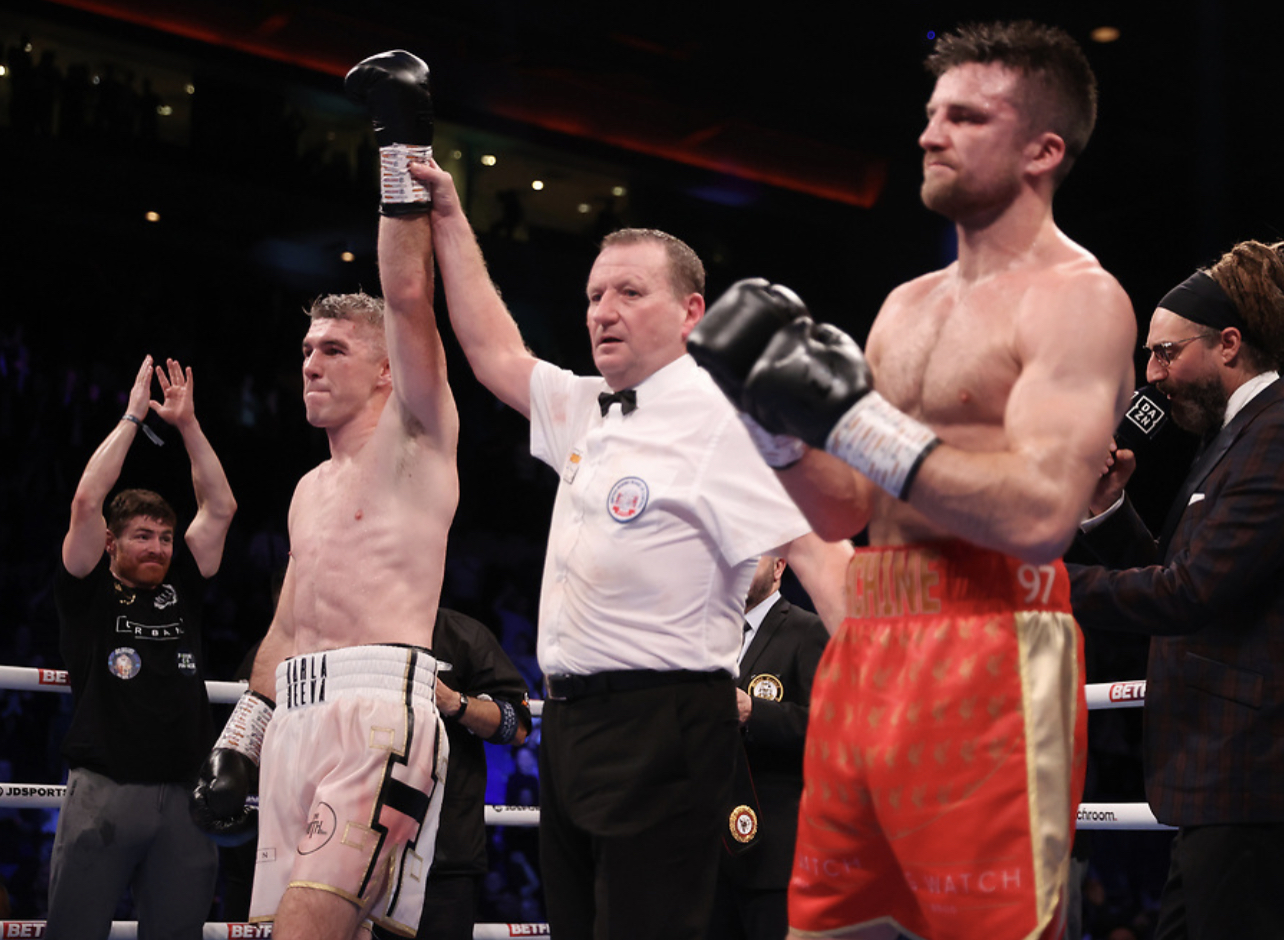 Liam Smith proved he still has plenty to offer at 154lbs with a conclusive and commanding performance against city rival Anthony Fowler on Saturday night.

Despite suffering a cut in the first round, Smith rode Fowler’s early storm and quickly grew into the bout, scoring a heavy knockdown in the fifth after walking Fowler onto a thunderous right hand straight down the middle. Just as Smith predicted during the build-up, Fowler grew weary as the fight drew on, and was halted in the eighth after a punishing Smith left hook. Sheer exhaustion looked to have pulled the Toxteth man to the canvas alone after he was clearly feeling the pace of the previous two rounds, with Smith working through the gears seeking to close the distance.

The result leaves both fighters at opposite ends of the spectrum on the 154-pound ladder, with Smith building towards another shot at a world title. He called for Jessie Vargas post-fight, a name he’s been heavily linked over the last two years. Victory over Vargas will no doubt boost Smith’s position at world level, with the American finding himself in eighth position with the WBC and having shared a ring with the likes of Manny Pacquiao, Adrien Broner, Timothy Bradley Jr and Mikey Garcia respectively. A rematch with Magomed Kurbanov was also touted before a deal was made with Fowler following Smith’s controversial points defeat to the Russian out in Ekaterinburg in May of this year. It’s clear that ‘Beefy’ would relish the opportunity to correct that blemish on his record given the nature of the defeat as he works his way up the ladder for another shot at world honours.

Fowler on the other hand must go back to the drawing board with trainer Shane McGuigan as they map out the next stage of ‘the Machine’s’ career, with the Toxteth man now in his thirties. European champion Sergio Garcia is a name who was mentioned by promoter Eddie Hearn following Fowler’s defeat to Smith, with Garcia having already taken a British scalp in the shape of Ted Cheeseman back in 2019. There’s merit in the argument that such a fight would have provided an ideal step up before entering the ring with someone possessing the class and experience of Liam Smith, but credit must also be given to Fowler for being willing to test himself and get in there with the best. The defeat to his fellow scouser is by no means detrimental to his long-term plans as, despite his age and extensive time spent in a ring if you include his amateur career, he clearly lives the life and cuts no corners outside of the ring. He will have plenty of time to continue learning the trade and come again.

Another potential opponent for Fowler may lie in the form of the aforementioned Cheeseman, who also suffered a crushing defeat on the undercard to Darlington’s Troy Williamson via tenth round stoppage. In typical Cheeseman fashion, the fight was back and forth all night, although the better and more consistent work did come from Williamson. The accumulation of punishment both sustained on the night and potentially in previous bouts eventually broke Cheeseman down as he was left sprawled between the ropes following a hellacious barrage which ended with a damaging Williamson left hook. As a result, the British title migrates to the North-East of England and leaves Cheeseman pondering his next move. One can only be left concerned for both his short and long-term wellbeing given the amount of punishment he has shipped in such a short career to date, with hard bouts against the likes of Sergio Garcia, Kieron Conway, Scott Fitzgerald, Sam Eggington, JJ Metcalf and now Williamson surely taking their toll.

Boxrec now has Troy Williamson ranked as the second-best super-welterweight in the country, behind only Liam Smith. He himself may fancy a shot at the European title and Sergio Garcia and finds himself ranked eleventh in the IBF rankings. ‘Trojan’ has now stopped eight of his last nine opponents, which include impressive victories over the likes of Kieran Smith, Harry Scarff and now Bermondsey’s Ted Cheeseman. Fellow Frank Warren stablemate Hamzah Sheeraz (13-0) has shown great promise so far in his career, and a shot at the British title in a fight one would assume would be relatively straight-forward to make would make sense at this stage. Sheeraz also holds a strong ranking with the WBO, at twelfth, an organisation promoter Frank Warren has historically experienced a strong relationship with.

The super-welterweight division is flourishing at domestic level with encouraging depth and more importantly the bigger names fighting each other. In recent months we’ve seen the likes of JJ Metcalf and Troy Williamson cross promotional barriers to provide us with fight of the year contenders and hopefully set a trend that the rest of the sport can follow. Competitive matchups are what will allow the sport to continue to thrive and write stories like those we have heard from yesteryear. Long may this continue.