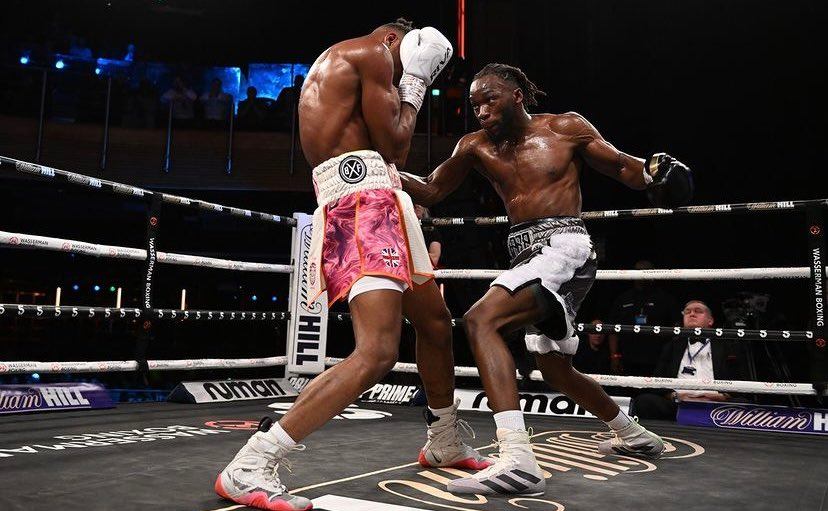 Denzel Bentley was re-crowned British middleweight champion last night with a closely contested split-decision victory over Linus Udofia in London. Bentley, who previously held the Lord Lonsdale strap at 160lbs before surrendering it to Felix Cash last year, edged out Bedfordshire’s Udofia by scores of 116-112 and 115-113 respectively, while the third judge found Udofia a slight winner by a score of 115-114.

Udofia, who entered the contest with an undefeated record, started the contest well and enjoyed success in the opening couple of rounds at long range. Bentley re-grouped in the third however and enjoyed success with the straight right-hand with the fight gearing up as the first third of the bout grew to a close. As the fight grew on, the more experienced Bentley looked to drag Udofia into a shootout, despite the latter enjoying greater success when keeping the fight at range behind an accurate jab. Many of the rounds were close, and one could be forgiven for having either man slightly ahead as the fight reached the middle portion. Bentley looked to have scored a clear knockdown in the eighth with an accurate right-hand, forcing Udofia’s right knee to touch down momentarily, but referee Mark Lyson was blindsided and failed to see the dip of Udofia’s legs. The Bedfordshire man was no doubt hurt however as the bell sounded at the end of the eighth, with the momentum of Bentley seeming to grow as the championship rounds grew nearer. The final round saw Udofia looking to simply see the fight through, indicating confidence that he was ahead on the cards despite the close nature of the fight, but Bentley finished strong as he continuously pushed his opponent onto the ropes and let his hands go with seconds remaining. After what was no doubt a close, competitive and entertaining British title fight, either man could have been awarded the victory by a round or two, with the split-decision an accurate portrayal of how the fight had panned out. Udofia can take solace in his performance with it being the first time he has been taken the twelve-round distance, and will no doubt benefit from the experience.

Rio 2016 Olympian Josh Kelly was poised to make his return to the ring following his defeat to David Avanesyan last year, but opponent Xhuljo Vrenozi bizarrely refused to fight just hours before the contest was set to take place. Promoter Kalle Sauerland told Channel Five that the Albanian had ‘bottled it’ despite multiple attempts by Wasserman Boxing to re-negotiate Vrenozi’s purse. Sauerland revealed that it soon became apparent that the decision not to fight was nothing to do with money and that they simply had no interest in entering the ring against the Sunderland man. Kelly is now set to appear in Liverpool in June, with the sport of boxing continuing to throw up more crazy storylines week by week.

Harlem Eubank moved to 14-0-0 as a professional with an impressive statement victory over Sean ‘Masher’ Dodd, the former stopping Dodd in the second round with a big left-hand. Eubank now surely looks to land big domestic contests at super-lightweight as his professional career looks to really gather momentum.

Further down the card, Brad Pauls secured a split-decision victory over Ryan Kelly in a British middleweight title eliminator. Pauls now looks to be one-step closer to challenging Bentley for the Lonsdale strap following both of their victory’s last night. Alizera Ghadiri secured his fifth professional victory in as many fights with a whitewash six-round points victory over Khvicha Gigolashvili, while Harvey Horn returned from his first pro defeat with a comfortable victory over six rounds versus Alejandro Torres. Constantin Ursu moved to 5-0-0 at welterweight with a four-round points victory, while Katherina Thanderz out-pointed Tereza Dvorakova at super-featherweight. Welterweight Dan Morley also moved to 8-0-0 with a technical knockout of Ivan Njegac.