Maccarinelli Not Ready to Retire Yet ! 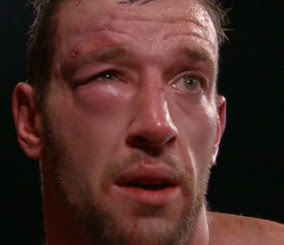 In spite of the fact that former World Boxing Organization cruiserweight champion Enzo Maccarinelli (29-4, 22 KO’s) has taken out in three of his last four fights in the past year, he’s not ready to retire yet. Last Saturday night, Maccarinelli was stopped again, this time by Russian Denis Lebedev in a third round TKO at the M.E.N. Arena, in Manchester, England.

After the fight, Maccarinelli said that it was a “possibility” that he would retire. But he may be having second thoughts. If Maccarinelli does continue with his career, he needs to make some serious changes to his career and start looking for another trainer like Emanuel Steward or Freddie Roach.

Those kinds of trainers don’t just take on anyone, though, so it might not be as easy as simply selecting them as if he’s grocery shopping. It seems that for whatever reason, Maccarinelli’s ability to take hard shots has diminished significantly since his 2nd round defeat to David Haye last year in March.

Maccarinelli, instead of taking it easy for awhile and test the waters slowly to see if he wasn’t permanently damaged by the defeat, turned around and stepped into the ring with the hard-hitting Ola Afolabi in March and ended up getting taken out in the 9th round after getting hit with a crushing right hand from Afolabi.

The defeat seemed to have shattered Maccarinelli’s confidence in himself, because he fought like he wasn’t there mentally in the fight against Lebedev on Saturday, throwing only one punch at a time and not throwing combinations like he used to do.

Maccarinelli was beaten up in the first two rounds by Lebedev, who came after Maccarinelli, showing zero respect for the former champion and hitting him with big body shots. In the 3rd round, Lebedev landed a huge left uppercut to the head that sent Maccarinelli retreating backwards badly hurt.

There’s a lot of things that Maccarinelli will have to do if he wants to continue his career and be successfully. Beyond getting a new trainer, Maccarinelli needs to take it easy for awhile, and take six to eight months off away from boxing to let his head recover from the three knockout losses in the past year. Apart from that, Enzo needs to stick to fighting light-hitting fighters for a year or so and work on using his reach, putting his punches together and learning to move more laterally.

Maccarinelli is too stationary for his own good and needs to learn to move more and use his jab. Against Lebedev, Maccarinelli rarely threw jabs in the fight, which was incredible considering that he had a significant height and reach advantage against the 5’10” Lebedev. At 6’4”, Maccarinelli should have been able to jab from a distance and control Lebedev.

Instead, however, Maccarinelli failed to use his height and reach and let the Russian fighter crowd him and land his shorter punches. It seems that Maccarinelli fights like someone much shorter than his height and is going to have to unlearn that if he decides to continue with his career. By Nate Anderson