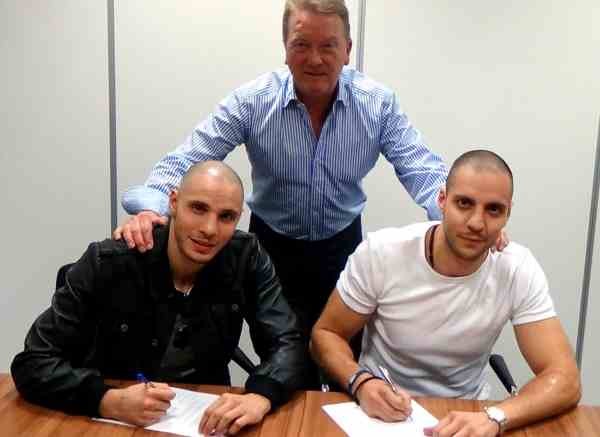 Chris and Andreas, who are of Greek-Cypriot descent, have attracted a huge North London following and are both looking forward to fighting on the same card for the first time in two and half years.

Light-welterweight Chris, 27, known as “The Flash”, turned professional in 2009 and has racked up 11 fights with 9 wins.  His last two fights were points losses to Danny Connor for the Southern Area Championship and will be looking to get back into title contention.  He said, “When I saw all the big fights growing up on TV, you would always see Frank Warren promoting them so it’s hugely exciting for our carers to sign with him.”

Light-heavyweight Andreas, 29, is targeting his first title fight after amassing an unbeaten eight fight record since turning professional in 2011.  Known as “The Ace”, Andreas’ last fight saw he defeat James Tucker in June.  He said, “All of our fans will be turning out at The Copper Box, we will pack the place out. It’s great to be fighting at the Olympic Park and the atmosphere will be electric.”

Warren added, “I’m delighted to welcome Chris and Andreas to the Queensberry Promotions team and I look forward to working with them and guiding them both towards championship honours.  Along with Frank and Georgie they form a very strong quartet of fighters’ from north London and with their huge fan bases it will create a great atmosphere at the Copper Box Arena on November 30th.”

Please click here for a free to use photo of Frank Warren with Chris and Andreas Evangelou.

Tickets for Rock The Box 2 priced at: