Amir Khan v Marcos Maidana – Will it Happen Next? 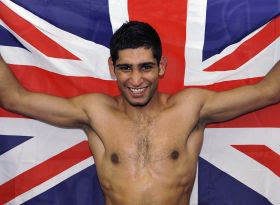 Amir Khan and interim light-welterweight title holder Marcos Maidana have been given a two-week extension to see if they can come to an agreement for their mandatory fight, at the request of Golden Boy Promotions CEO Richard Schaefer.
Khan who signed with Oscar De La Hoya‘s Golden Boy promotions last week, after splitting with Frank Warren, had been looking into his next fight with Warren, and now under Golden Boy, has asked for time to plan out another strategy with his new team.
Golden Boy who also co-promotes Maidana in conjunction with Universum, one of the leading Boxing promotors in Germany, may decide to put the Maidana fight back, as to build the fight up more, they dont believe Maidana is a big enough name at this stage.
If this is the case, both fighters will likely face different oppoinents on April 17th at the Mandalay Bay in Las Vegas, Nevada on the undercard to Roy Jones Jnr and Bernard Hopkins rematch, seventeen years after there fist meeting, which Jones won on points.
The  WBA reported on there Web site that the purse bid had been canceled because they reached a “tentative agreement” for the bout to take place “approximately” at the “end of March or beginning of April.”  they had scheduled Monday for purse bids to be in, before agreeing to the extension request.
But Richard Schaefer, wanted to point out that it was Golden Boy who had asked for the extension, which is why the purse bid was called off, not because a deal for the fight had been made.
“Amir Khan just changed promoters and is with us now, so we asked the WBA to allow us to discuss things with him to see what he wants to do and so we can speak with our co-promoters with Maidana to see if we could come to terms without a purse bid, or work out a situation acceptable to both parties, and that was granted,” Schaefer said. “We have two weeks to see what we can work out. If we can’t work anything out we will go to a purse bid.”
“A situation where they are on the same card would make sense. Let’s build up the fight,” Schaefer said. “We want to explore what other fights are out there.”
Schaefer has discussed a match between Khan and former titlist Paulie Malignaggi with Malignaggi promoter Lou DiBella, but said that Khan facing the 26 year old Maidana (27-1, 26 KOs), is still possible for his next bout. 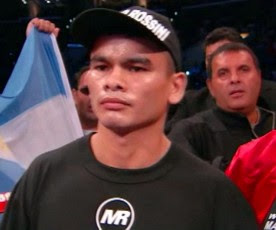 Freddy Roach, Khans trainer had apparently said that he didn’t want Amir to fight the dangerous Argentinan (pictured) at the moment and would prefer to look at other options! This would almost certainly have meant Khan giving up his WBA light-welterweight title, paying Maidana step aside money, with a fight further down the line, something that Khan is not keen on doing atall.
“Amir has not said to me, nor has Freddie said to me, that they are afraid to fight Maidana,” Schaefer said. “But at this point of his career, there are other bigger names out there.”
Paulie Malignaggi the current WBO and NABO light welterweight champion, has been mentioned as a possible foe. When asked if the Khan fight was a possiblity, Malignaggi said, ” I Would love to fight Amir Khan, but the fight is not signed! just rumors as of right now”
Other names on the short list include former lightweight title holders Juan Diaz and Nate Campbell, both of whom are promoted by Golden Boy, and could be potential opponents for the Brit.
“If they are not available, Khan is not saying he won’t fight Maidana,” Schaefer said. “We have two weeks to figure it out.”
By Chris Maylett email author