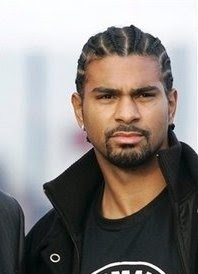 David Haye, British Boxings  WBA heavyweight champion, will make the first defence of his title when he takes on American Puerto Rican and former two time heavyweight crown holder John Ruiz.
The Easter Sunday clash which will be shown live on Sky Box Office on Saturday, April 3rd, 2010, was anounced today at a press conference in Manchester.
The fight will be held at the impressive Manchester M.E.N Arena, which over the last few years, has held some of the biggest boxing events, including many of Ricky Hatton‘s battles.
This will be the first heavyweight title fight staged in the UK since Lennox Lewis defended his titles against Frans Botha in 2000.
Haye hopes a win against Ruiz will open the heavyweight door and a unification fight against brothers, WBC champion Vitali Klitschko, 38, or his 33-year old brother Wladimir, who holds the IBF and WBO belts.
Haye 29, with a record of  23 fights, 22 wins with 21 of those wins coming by knockout, won the  heavyweight title when he beat the Beast from the East, Nikolai Valuev in November 2009.

John Ruiz is the WBA’s No.1 contender, and was in line to fight Valuev last time out for the championship, but he agreed to step aside, for allowing Haye to challenge the Russian, with the promise  that he would be given the chance to fight the winner, money still talks in boxing.

An unhappy Ruiz though believed the fight would be staged in Las Vegas, while Haymakers plans were always destined for a first defense on home soil, and the challengers no show at todays press conferance didn’t please Haye too much.

“We paid for first-class tickets over here, a great hotel, but he didn’t get on the flight,” said Haye. “I don’t know what his reason is.
“He might claim he is in intensive training, but you still have to promote the fight.
“They call him the Quiet Man and I think he’s a pretty boring personality.
“People ask me will I wind him up? But do I need to? He does the same thing in every fight and it doesn’t matter if I goad him or not.
Ruiz who will be fighting for the heavyweight title for the13th time! has enjoyed mixed fortunes at the top of the division with victories over Evander Holyfield and Hasim Rahman, and losses to Nikolai Valuev and the legend Roy Jones Jnr, who stepped upto the heavyweight division to out speed, out box and out-point him.

Hayes trainer, Adam Booth added, “John Ruiz is a master at making great fighters look ordinary and we are very wary of the threat he poses,”

“I’m over the moon about having the fight in the UK and on Sky Box Office,” said Haye.
“It’s been 10 years since the heavyweight championship has been fought in Britain and everyone knows I had to go to Germany to take the title away from Nikolai Valuev.

“Now it’s time to showcase my skills again in front of the great British public. Haye had hoped to make his first defence at London’s O2 Arena, where he as fought a few times,  Haye also ear-marked Millwall Football ground, The New Den as a possible venue, being a Millwall fan, but both stadiums were already booked on the date required.

“And I’m delighted to have the fight at Manchester’s MEN Arena. I’ve been there on many nights to watch Ricky Hatton, Joe Calzaghe, even Mike Tyson when he fought Julius Francis and the atmosphere was tremendous.

“I’m looking forward to getting back to what I do best – throwing my trademark Hayemakers. Ruiz is a come-forward fighter so I aim to get at him, break him down, and take him out in good style.
He is a boring fighter, I call him a cure for insomnia, but I wont be underestimating him

“He will try to drag me in the trenches, but I’ve got to stand with him, break his heart and knock him out, if he thinks that im the same fighter who lost to Carl Thompson, then let him.”

Golden Boy Promotions are to promote both the champion and challenger, and ring legend and Golden Boy founder Oscar de la Hoya believes Haye is the man to re-ignite the heavyweight division.

“With his explosive fighting style, heart, youth and charisma, David Haye is the most exciting heavyweight in the world,” said de la Hoya.

“On the other hand, John Ruiz is a very experienced fighter that knows what it takes to dominate in the heavyweight division and to win when it counts in a big fight. I expect a great fight that fight fans shouldn’t miss.”

Haye has made a statement in American with his win against Valuev, and Golden Boy were keen to work with Haymaker promotions, believing that the flamboyant Haye is the man to re-vitalise a dull heavyweight scene.

Richard Schaefer, Golden boys CEO, added: “David Haye versus John Ruiz is going to be one of the most explosive heavyweight fights we have seen in a long time.
“Both fighters are going to leave it all in the ring on 3 April and we at Golden Boy are very excited to be a part of such a great event that will show boxing fans that the heavyweight division is a division to once again pay attention to.”