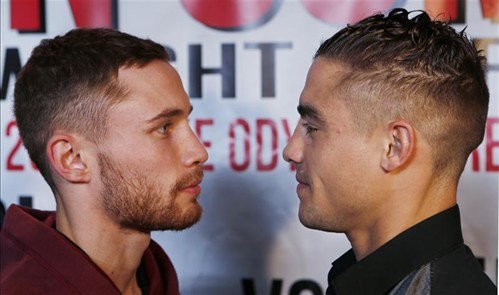 Frampton weighed-in and ready for Belfast battle with Parodi

Both boxers weighed in before Saturday’s sold-out main event at the Odyssey in Belfast. You can watch the fight live & exclusive on BoxNation. The two super-bantamweights will face off in front of a sell-out 8,500 crowd with the winner set to earn a tilt at the IBF world title currently held by Spain’s Kiko Martinez.

Carl Frampton has admitted that the only footage he has seen of the man who stands in the way of his shot at a world title is from a television game show. The Belfast super-bantamweight takes on French contender Jeremy Parodi in a world title eliminator, live on BoxNation this weekend, with the winner set to challenge for the IBF crown early next year.

Though Frampton has been hard in training, preparing at the gym of his promoter Barry McGuigan in Battersea Park in London, he admits that most of his inside knowledge of the 26-year-old Parodi, comes from watching him take part in a French television show.

“This fight against Parodi, who’s only one stop behind me in the IBF rankings, is all about getting myself into a mandatory position for a world title shot,” said Frampton.

“I’ve seen very little footage of Parodi but I did see him on a French version of Fort Boyard on YouTube the other day and he failed the task! He had to pull himself along and get the key but ended up falling off.

“I was watching it thinking ‘I would’ve passed that task!’. That’s all I’ve seen. If he can’t pass a task like that on Fort Boyard then I don’t know,” he said.

Frampton is well aware of the importance of the fight knowing that his world title challenge could be against Kiko Martinez, who he beat earlier this year but who subsequently went on to claim the IBF super-bantamweight world title against Columbian Jhonatan Romero in August.

“It was a little frustrating seeing Kiko Martinez go on and win the world title after beating him. I was thinking ‘That could’ve been me’, but you have to take the positives out of everything, and the positives are that I beat a world champion and knocked him out,” said Frampton.

“This fight coming up is an eliminator for the world title and hopefully I will fight the winner of [Jeffrey] Mathebula-Martinez – around February/March time – I think they have to box before Christmas,” he said.

“I’ll be the number 1 in the IBF after this next fight. Things happen for a reason. I always believed I was going to be a world champion. So what if Kiko Martinez is world champion before me? As long as I’m world champion one day,” Frampton said.