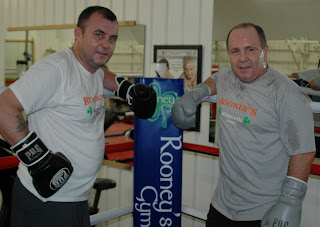 The newly appointed BBBofC Southern Region Chairman,  Mick Collier, is a firm believer in leading from the front. So much so that this week, in between carrying out his normal duties as Chairman and business commitments, he spent some time at London’s premier boxing gym, Rooney’s Boxing Gym in Southwark, to meet with local fighters and coaches.

I believe it’s important to keep close to fighters, trainers and managers.”

Mr. Collier then went on to talk briefly on a one of his major plans. “We’re looking to arrange an award ceremony in April or May. We’re following the lead by the Midlands Area who started one up about fifteen years ago.

It’ll be good for the Southern Area to also have an awards ceremony because we are now the biggest region, since we incorporated the Western Area.”

Mr. Collier will be attending the first major championship fight of his Chairmanship when he officiates at the Frank Maloney promoted British Bantamweight title fight between current champion Ian ‘Dappa’ Napa and Jamie McDonnell at the Brentwood Centre in Brentwood, Essex on the 22nd January.