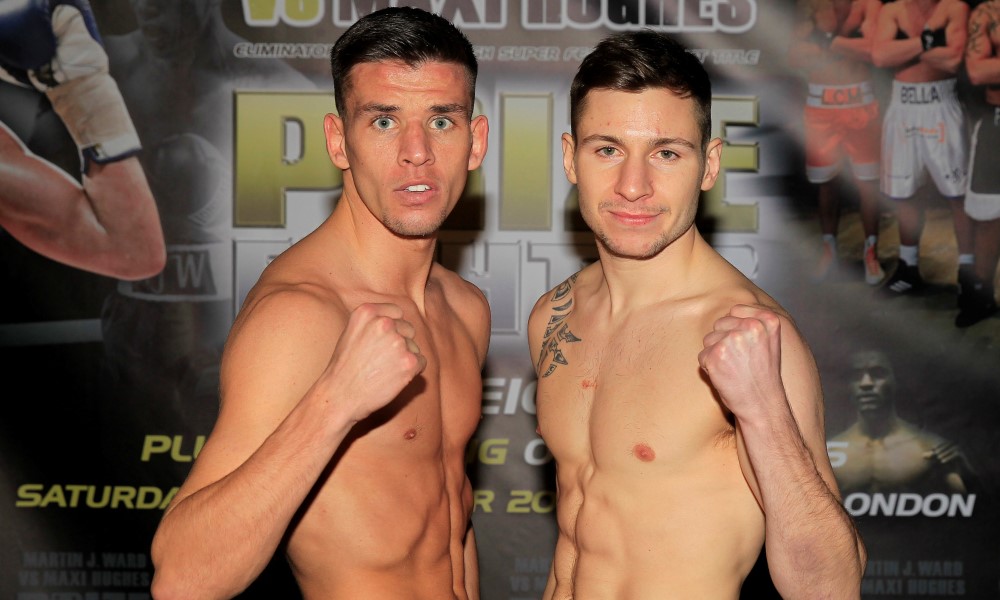 Ward confident prior to tonight’s British title eliminator against Hughes

WARD: I WILL STOP HUGHES LATE

Martin J. Ward believes he’ll have too much for Maxi Hughes to handle when the pair meet in a British Super Featherweight title eliminator tonight (December 6) at York Hall, Bethnal Green, live on Sky Sports.

Unbeaten Ward faces the Rossington man at the east London boxing mecca and while he rates his 24 year old opponent, he expects to overpower ‘Maximus’ in the later rounds as he faces his first southpaw in the paid ranks.

“He is an all-round pretty sound pro but he doesn’t have what I have got and I believe I have more than enough in the tank to beat him,” said Ward, who scaled 9st 3 ½lbs on Friday, as did Hughes.

“He is a southpaw. A lot of orthodox fighters struggle with southpaws but I love fighting southpaws. He is not the most elusive of fights. He has a good boxing brain but I am going to be too quick, too sharp and hit too hard for him.

“It could go the distance. I am going to go out there and enjoy it. I am not going in there swinging and punching looking for a big knockout. I will keep my head on my shoulders and go and stick to my advice from Tony in the corner. But if he walks onto one he walks onto one and I have the power to knock him out.”

Ward and Hughes both faced Kakhaber Avetisian in their last outings – Ward stopping the experienced Georgian in the final round of eight at Wembley Arena on September 20, eight days after he’d taken Hughes ten rounds for the vacant International Masters Super Featherweight title in Sheffield, with Hughes winning every round.

“We both had the same opponent for our last fights and you can take a little bit from that,” said Ward. “Styles make fights and I believe my style is going to cause Maxi a world of trouble. I believe he is in for a hiding tomorrow.

“I step up with each fight that goes on because I am looking to get to the title stage and this is an eliminator for the British. He has proved himself over the ten-round distance that he is a decent ten-round fighter so he is a step up but it is one where I am excited to be able to show what I can do.

“I have been in a really hard camp for this fight, I have trained the hardest I ever have for a fight and I want to make a statement to every Super Featherweight in the country that I mean business. I want that British title around my waist by next summer.”

The title is now the property of Liam Walsh after the unbeaten Norfolk man took it from Gary Sykes in London last week, and Ward was a keen observer of their bout.

“Liam looked really good in winning it,” said Ward. “Sykes was a little bit off point to be honest, I wasn’t impressed with him, but Liam looked a good fighter. I cannot look past Maxi because I am in for a tough night’s work and I have put my body through hell over the last ten weeks for this and I am going to prove I am a legitimate challenger for the title and show that I am ready to take it home with me in the New Year.

“I am in there mixing it with some great fighters in the gym and in sparring. Sparring is different from fight night but the quality of sparring in the gym, I love it. I enjoy every moment of it and all the hard work is towards fight night and this is the enjoyable part of it.”

Hughes and Ward clash in between the semi-finals and final of the Prizefighter Lightweights III, with yesterday’s draw throwing up a rematch in the top-half while the two favourites are separated in the bottom section.

Danny Connor and Michael Devine met in the same venue in September only for their ten-rounder to be halted prematurely when a clash of heads left Connor with a cut that he couldn’t continue to box with.

They clash in the second quarter-final with the winner then facing either Craig Whyatt or Lee Martin, who kick off the action.

The night begins with outings for former British and Commonwealth Light Welterweight champion Ajose Olusegun fighting back in the UK for the first time since 2011, and talented young Lightweight Ohara Davies in his fourth pro fight.

A limited number of £40 tickets for Saturday night’s action are still available from www.matchroomboxing.com.