Carl Froch has said he will pull out of the Super Six tournament unless his next fight against the German boxers Arthur Abraham is held in Britain.
Froch claimed to be the victim of a hometown decision when he lost his WBC super-middleweight title to Mikkel Kessler in Herning, Denmark.
The Nottingham boxer lost his unbeaten professional record as Kessler won a thrilling fight by unanimous decision and said: “I am adamant that the next fight, with Arthur Abraham, will be taking place in Britain.”
Froch felt even though the fight was close, that he had won it despite not being at his best and insisted afterwards that the verdict would have gone his way had it been on English soil.
With a win and a loss from his two tournament outings, Froch next faces German-Armenian Arthur Abraham in his final group stage fight. The Englishman and his promoter Mick Hennessy claim to have a long-standing agreement that the fight would be held in Britain but Sauerland Events – who promote both Kessler and Abraham – are now claiming they want it to be staged in Berlin. 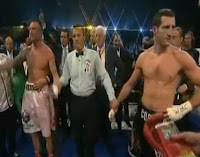 Froch added: “I won’t be fighting in Germany, it’s as simple as that. It is thought that the agreement for the fight to be staged in Britain was a verbal one.
“It would mean me pulling out of the tournament if they forced me to fight in Berlin. So I want to get that straight from the start: it has already been agreed that I would fight at home, fight away and a fight back at home. It has been agreed with Ken Hershman at Showtime (Super Six organisers).
“So my fight with Abraham is in England or the fight is not happening and will make a mockery of the tournament. It’s as simple as that.”