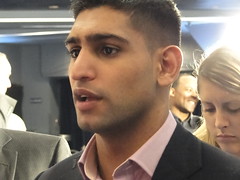 Amir Khan is all set to fight again in July, having only just defended his WBA light welterweight title on Saturday against Paulie Malignaggi. Bolton’s 23 year old champion is keen to get back in the ring sooner rather than later.
Khan has told Golden Boy promotions that he wants to fight as regular as possible on his planned assault on becoming the undisputed champion at light-welterweight, before moving up to the welterweight division.
Khan made himself a household name in America, after stopping Malignaggi in the 11th round at Madison Square Garden, New York, and is hoping that the proposed bout in July could possibly be in the UK, which would work out to be good timing for the devout Muslim, who will then be fasting, before the start of Ramadan in August.
Khan dismissed the idea that a summer fight would be too soon after his last outing and revealed he has the backing of his coach Freddie Roach to fight three times this year.
“I think it’s perfect to be honest,” he said. “I trained hard and in the (Malignaggi) fight I don’t think I took much punishment. It was quite easy and I didn’t take too many big shots.
“Being young, I think I can afford to have less of a break and jump in this fight quite soon.
“Freddie [Roach] is happy to do that, so we will see how it goes. First we’ll have to get an opponent right, and then we can get a fight on.”
Khan had told friends this week that after Saturday’s fight that he was really feeling ill, and had sore arms, knuckles, a bad eye and was hurting post fight come down, testament to the courage Malignaggi had shown in lasting 11 rounds with the precise punching Brit, who dominated the fight.
Other good news for the Khan family came this week when Amirs brother, Haroon was accepted to fight at the Commonwealth games in India representing Pakistan, having been over looked by the Great Britain team.
Haroon is eligible to represent Pakistan has it is the birth place of his grandparents, who came to England in the 1950’s . Haroon was approached by the Pakistan amateur boxing board, when it was confirmed he wasn’t to be included in the GB team
Haroon is a very accomplished amateur with all the skills and bravery of his older brother who was Olympic silver medalist at just 17 and is now on top of the world at light-welterweight as the WBA champion, it could well be a case of GB’s loss and Pakistan’s gain.

Although Harron said that even though he would, and is happy to represent his ancestrial birth place, for the Commonwealth championships, he would not be boxing for them at the 2012 Olympics in London, as it just wouldn’t feel right.

Who next for Khan?
Roach says. “Khan can be the best”