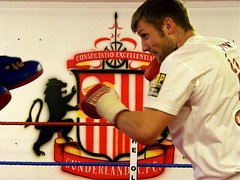 Sunderlands Tony Jeffries in training Image by JoshHalliday
“There’s always been a lot of talent in the North East.” Tony Jeffries
Tony Jeffries feels more North East fighters should get a share of the limelight he has enjoyed since returning from the 2008 Olympics with a bronze medal.
Jeffries has his seventh professional contest at Peterlee Leisure Centre on June 4, when he’s joined on the bill by Sunderland-trained prospects Kirk Goodings and Dave Ferguson.
The super-middleweight’s Olympic success in Beijing earned him a professional deal with Frank Maloney, who has ensure Jeffries gets great exposure in live fights on Sky Sports.
And his involvement on Sky-screened bills has helped bring work to other North East boxers on the same bills.
Jeffries said: “There’s always been a lot of talent in the North East. The amateur game is still really healthy and some fighters are moving into the pros now like I have.
“It’s good for all of us to be on these Sky shows. If you can do well on the TV then you can start to build a bit of a name for yourself and I think it’s great that there are a lot of North East fighters on this show at Peterlee.”
Top of the bill on June 4 is the British bantamweight title scrap between Darlington’s Stu Hall and London’s Ian Napa.
Hartlepool-trained Martin Ward, South Shields’ George Watson and Fishburn’s Gary Fox are also included.
Tickets priced £30 and £65 (ringside) are available from Phil Jeffries on 0191 564 0202 or 07747 611020.