Malignaggi: "I will knock Khan out" 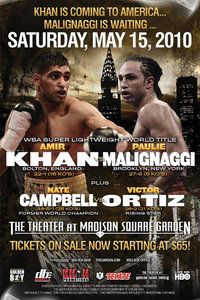 Paulie Malignaggi was in top form on On the Ropes Boxing Radio station this week, ahead of his WBA world title challenge against Britain’s champions Amir Khan.

In an exclusive interview with the Internet radio station, the former IBF junior welterweight champion Paulie Malignaggi spoke about the fight and what Amir Khan can expect on May 15th, and also touched on the Manny Pacquiao and Floyd Mayweather drug testing argument, without pulling any punches Malignaggi tells it like it is and demands Pacquiao takes the tests. (play video to listen to the interview)
On the challenging Khan for his title, Malignaggi was insistent there is going to be a new champion in Madison Square Garden come next Saturday.
“Everything is good. I’m excited, I’ve been working very hard, I feel very prepared, and I can’t wait until next Saturday, I really can’t.”
Malignaggi See’s Freddy Roaches claims that Khan will knock him out inside three rounds as a joke and plain arrogant, and Malignaggi thinks that the predictions will be reversed in his favor and that Khan has been misinformed.
Malignaggi never stuck for a word went on –
Paulie Malignaggi Gives it to Pacquiao about taking a drug test and coming clean, in a no hold bar interview with www.ontheropesboxingradio.com

There’s always trash-talking and there’s always stuff that gets said back and forth with camps. It’s just a part of boxing, but this guy, the arrogance this kid has coming into this fight is a little bit too much now. I think he’s been misinformed. I think he thinks he’s been fighting at a world class level. I think he’s been reading too much of his press. He has no idea what it is to step up to this level and next Saturday night he’ll find out..”
Malignaggi also made the claim that Khan is also way off in thinking that he is world class? and said Khan is ok, just decent.
“I don’t know. I guess he’s a decent boxer, but again, he’s been misinformed. He thinks he’s a world class fighter. He’s decent, you know. He does things okay. He’s not the strongest guy. He thinks he’s fast; he’s really not that fast. He just tries too hard. He tries so hard to be fast that gives up on a lot of other things trying to be fast. If you’re fast, you should just come out fluid—you shouldn’t have to get so stiff to throw fast punches and if you notice that’s what Amir Khan does. There’s just a lot of things. You’ll find out next Saturday night just how limited he is after what I do to him.”
With Khan still stuck in Canada, awaiting a Visa clearance to fight in the States next week and with time running out promoters are getting worried in the build up to the fight, but if it does take place, it looks like we are in for fireworks.