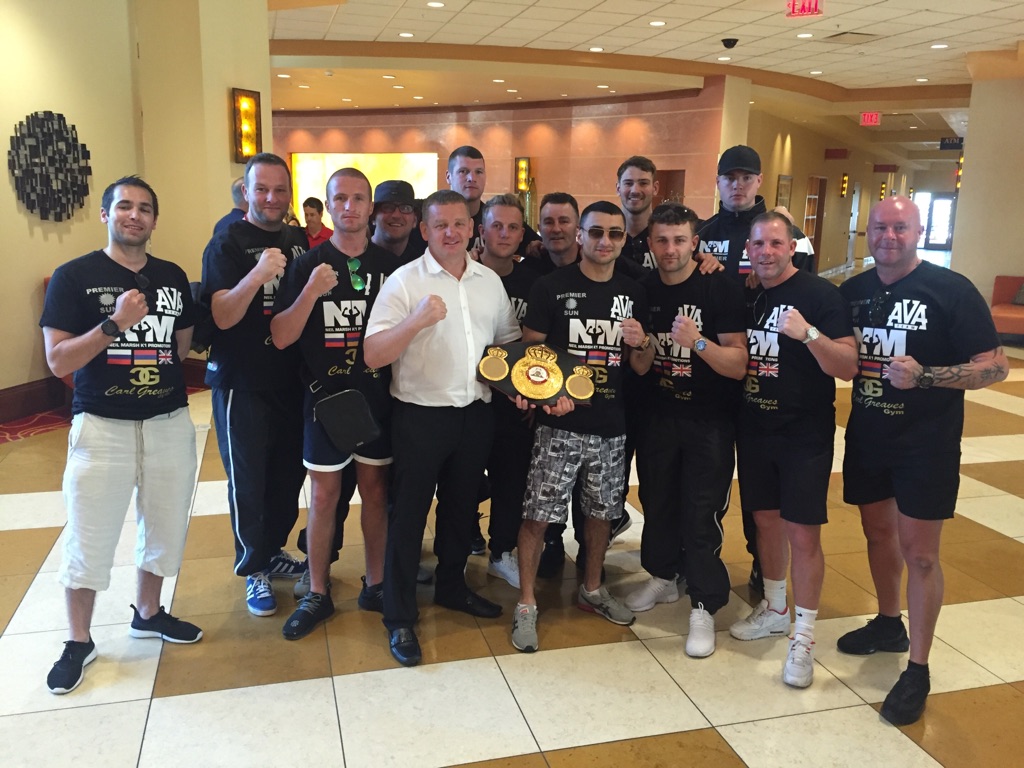 British-based Armenian welterweight, David Avanesyan – trained in Newark by Carl Greaves and managed by Neil Marsh – has sensationally been elevated to ‘regular’ world title holder by the WBA who, in what appears to be a linked move, have also named Keith Thurman, their current belt holder, as ‘super’ champion.

The promotion comes after negotiations for a title fight between the two broke down following Avanesyan’s decisive points win over ‘Sugar’ Shane Mosley earlier this year. Fighting in the USA for the first time, the 28-year old’s victory in Arizona in May ensured he became mandatory for Thurman’s title.

60 days of negotiations followed between Thurman’s team and Marsh but, with no agreement reached and potential massive fights against others looming the world governing body acted. The scenario mirrors that of Bury super-bantamweight Scott Quigg who was elevated to regular world champion in 2013.

It’s been a long road for the likeable Avanesyan who, after turning pro in Russia in 2009, made his first appearance in an English ring less than two years ago. His first contest for Marsh was a sixth round stoppage win over Ireland’s Dean Byrne on a dinner show in Blackpool in June 2015. Now, 15 months later, he finds himself a ‘world’ champion. He is understandably delighted.

Avanesyan said: “I am overjoyed at this news. I am so proud. Since I first started boxing as a boy in Russia it was always a dream of mine to become a world champion and now, after a career that has had many ups and downs I am a world champion. I am proud for my country and my family. The win over Mosley made me mandatory for the title but I understand it was difficult to arrange that fight but I believe I deserve the move up to world champion. Hopefully a fight with Thurman will happen soon. We will box again, defend our titles and maybe meet in the near future. It is a fight I still want.”

The news is also a significant coup for manager Neil Marsh, who has amazingly guided his charge to world title level and status after less than a year and a half. He too, is hopeful a fight with Thurman can happen in the future but first he plans to plot his fighter’s next move. He said: “Massive fights for world titles are always difficult to negotiate and this was no different. We couldn’t make it work but that’s boxing for you. Saying that, I am happy with the WBA’s decision and I’m delighted for David. He’s a great fighter with a great heart and even when the fights we wanted weren’t happening we all stuck together – David, Carl [Greaves] and me – and I believe this is our reward for that unity. Becoming a world champion is everything we have worked for and now we have that.”

Rumours of a fight against Amir Khan, perhaps in February on the undercard of a potential blockbuster between Thurman and Danny Garcia, or even a Philippines showdown with Manny Pacquiao, were dismissed by Marsh. “We will wait and see what our next move is but it’s looking likely that we will defend the belt, probably in the USA again, in the New Year. An announcement will be made shortly. There are some great options now for David. He has a belt that others want now so fights such as these and similar should be easier to make.”

Marsh was also keen to express his gratitude to his team, and the WBA, on securing the title for Avanesyan – who found himself mandatory for a title that some in the champion’s camp perhaps didn’t want to take. He said: “This has been the best Christmas present David and my team could have wished for. After some difficult negotiations I’d personally like to thank Gilberto Mendoza [WBA President] and the WBA Committee for allowing this. David got to the mandatory position through his and Carl’s efforts and, for me personally, I’m delighted that their determination and commitment has been recognised. I’d like to also thank my team. A lot of people have helped in so many ways – all with the goal of achieving something like this. Everyone played their part and I’m privileged to have them with me.”