British BoxersJune 7, 2010
LATEST BOXING NEWS0 Comments5 min read
Following some rather swift last minute negotiations, with promoter Steve Goodwin, Hackney’s Lightweight contender Mark ‘The Flash’ Alexander is set to face Sid Razak on Goodwin’s “Summer Fight Night Explosion” on Saturday 19th June at York Hall in Bethnal Green, London.
Last month, following his magnificent demolition of rising star Michael ‘Simply’ Devine, Alexander went on BBC London Boxing Hour, presented by Steve Bunce, and called out former English Champion Ryan Barrett. He got his wish, but not for right away, and will face Barrett as the headline on Steve Goodwin’s “It’s Personal” event on September 11th.
With the British boxing season rapidly coming to a close Alexander, who wanted to keep the momentum going, started looking for a June or July fight. With time running out Steve Goodwin stepped in to save the day, by adding Alexander vs. Razak to the stacked “Summer Fight Night Explosion” card.
Following an intense sparring session with the pitbull better known as Southern Area Lightweight Champion Ben Murphy at the Ultrachem TKO Gym in Canning Town, London, ‘The Flash’ spoke about the upcoming fight with Sid Razak, “I can’t thank Steve Goodwin enough for putting me on the June 19th show. It’s going to be a great show, I mean he has twelve quality fights on the card.
It’s important for me to keep active, I don’t want to be just sitting around. I’m in great form, the fight with Michael Devine showed that.
I mean he was being touted as the new Ricky Hatton. He’d stopped all his previous opponents. I was too elusive for him, he couldn’t land anything on me. Everyone was shocked when I put him down. I wasn’t – we’d been working on it. The only thing that surprised me was that the fight wasn’t stopped after I put him down for the second time.
He showed great determination by getting up each time. He fought hard even after the third knockdown, but I knew it was just a matter of time before I knocked him out rather than just down.
Since then Barry (trainer Barry Smith) and I have been working hard on things in the gym. I want to take it to another level, to do that I need to fight again soon.
That’s why I’m really looking forward to the fight with Sid Razak. He’s been in with Ryan Barrett so it makes a lot of sense to fight him.
That was a good win over Michael Devine but I’m going to make it great wins over Sid Razak and Ryan Barrett. Believe me ‘The Flash’ is back…big time.”
Mark ‘The Flash’ Alexander versus Sid Razak will be on the Steve Goodwin promoted “Summer Fight Night Explosion” at York Hall in Bethnal Green, London.
The stacked TWELVE fight card for “Summer Fight Night Explosion” includes the return of, International Masters Champion, Yassine El Maachi against Dee Mitchell. 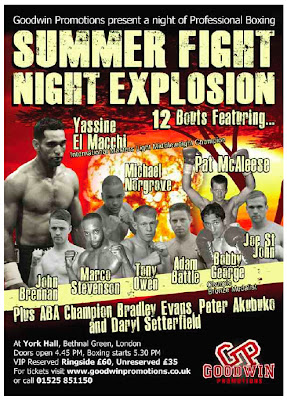 El Maachi, who won the International Masters Light Middleweight Title back in April with a superb points victory over France’s Bertrand Aloa.
The card also features Daryl Setterfield, who recently knocked out the highly rated Darren Hamilton, against the experienced Matt Scriven.
Also a late addition to the card will be Alexander’s September 11th opponent Former English Champion Ryan Barrett, against a yet to be named opponent.
Former Olympic Bronze Medalist Boris Georgiev (Bobby George) will be looking to build on his excellent pro-debut win. As will the highly exciting Michael Norgrove when he faces the experienced Ryan Clark.
Rising stars Tony Owen, Joe St John and Bradley Evans will all be looking to increase their unbeaten records, whilst Welterweights John Brennan (opponent TBA) and Adam Battle, who will face Danny Dontchev, will be looking to impress on their pro-debuts.
Finally, Light Heavyweight Marco Stevenson will battle it out with Matt Jack.
What a great lineup, don’t forget “Summer Fight Night Explosion”, featuring Mark ‘The Flash’ Alexander versus Sid Razak is on Saturday 19th June at York Hall in Bethnal Green, London,
Ticket Priced (Unreserved) £35.00
For tickets: Call Mark on 07944 187153 or Rio on 07960 850645
Pics By Gianluca (Rio) Di Caro