Jeffries moving to America to train with Brooks 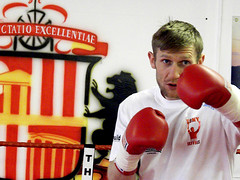 Sunderlands Tony Jeffries is to be trained by top American Tommy Brooks.
.
The Olympic bronze medallist, 25, been looking for a new trainer since splitting with Manchester trainer Bobby Rimmer in the summer and believes Brooks is the man to make him a world champion.
.
Brooks, 56, is best known for his work with Evander Holyfield who he is still training, but his knowledge of boxing makes him one of boxing’s most sought after trainers.
.
Other big names who have trained under him include includes Yuri Foreman, Junior Jones, Vitali and Wladimir Klitschko, Mike McCallum, Hasim Rahman, Mike Tyson and Pernell Whitaker.
.
Jeffries (7-0-1) will train for fights in Los Angeles and return to his hometown, Sunderland with Brooks to complete preparations ten days before each fight..
.
The light-heavyweight’s promoter Frank Maloney said: “I have no doubt that Tony has made the right choice.
.
“Tommy isn’t just a coach, but also a teacher and that is exactly what Tony needs to help him develop.
.
“I have seen Tommy work with fighters and he is one of the best trainers in the world.”
.
Maloney has known Brooks for more than 20 years and wanted him to train Lennox Lewis in the nineties.
.
He added: “When Lennox was looking for a trainer I put Tommy’s name up and he was interviewed, but the feeling among some of the team was that he was too inexperienced at the time.
.
“There has been criticism aimed at Tony, but people need to remember that two years ago he has never ever been in a professional gym to train.
.
“He will get a lot of one-to-one coaching with Tommy and will come on for it.
.
“A lot of other amateurs who turn professional have spent months or even years training in a professional environment.
.
“I believe in Tony as much as when I first signed him, but this is a long-term project and the negativity from certain sections has to stop.”
.
Brooks began training in 1982 after a short professional career and married into the famous boxing family, The Duvas.
.
He said: “I am looking forward to working with Tony and I am sure that given time with each other we will form a good team and I can get the best out of him.
.
“From our conversations it is clear he is willing to learn and there is plenty to work with.”
.
Brooks served his training apprenticeship under greats George Benton, Eddie Futch and Archie Moore.
.
Details of Tony’s first training camp under Brooks and his next fight will be announced next week.