British BoxersJune 5, 2010
LATEST BOXING NEWS0 Comments5 min read
Michael Jennings has wished Miguel Cotto good luck ahead of his clash with Yuri Foreman, and says he will fulfil a promise made after his clash with the Puerto Rican – and win a world title of his own.
Jennings challenged Cotto for the WBO World Welterweight title in New York last February, losing in the fifth.
The defeat made Jennings a fan of the hard-hitting Hispanic, and he says developed him as a fighter.
Now both men have big fights coming up, with Cotto in action against Foreman on Saturday night in New York in a challenge for the WBA World Light-Middleweight title.
“Miguel was definitely the best man I fought, and a true gent after the fight,” said Jennings.
“He told me I was good enough to be a world champion, and that I could come back.
“Those words were a comfort and I have always believed that I will get another chance and when I do I will take it with both hands.
“As for his fight with Foreman, I’d like to wish him the best of luck.
“Obviously he had a tough one against Manny Pacquiao. But he’s come back before and I know he will want to put it all on the line in front of his own fans in New York.”
Jennings challenges for his old British welterweight title on July 3rd at the Preston Guildhall against John O’Donnell, and he sees the fight as a stepping stone to greater things.
“I have not had too many hard fights, so I’ve got plenty left to offer,” he said. “If I beat O’Donnell that will lead to a fight against Kell Brook, and if I beat him, then I will probably get a world title chance, there’s so much at stake, especially as I love fighting in Preston.”
The quality-packed card, headlined by Michael Jennings versus John O’Donnell for the Vacant British Welterweight title, will also feature Tony Bellew‘s first Commonwealth Light-Heavyweight title defence, and rising welterweight hot-shot Ronnie “The Razor” Heffron. On the comeback  trail is former Commonwealth Light-Middleweight Champion Manchester’s Matthew Hall, and Liverpool stars Joe Selkirk and Liam Smith feature www.frankwarren.tv
Michael Jennings interview (here) 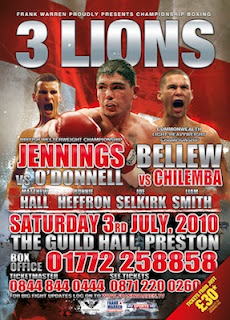