Cleverly promises to blitz German Murat like Calzaghe did to Veit 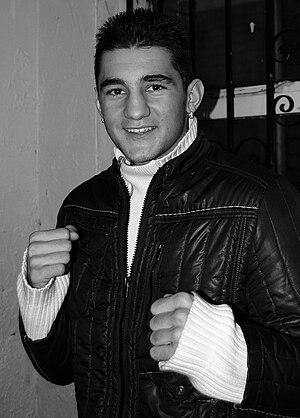 “I’m a big light-heavyweight and I’ve got the tools to take anyone out.”
Nathan Cleverly says he’ll knock out unbeaten Karo Murat in the first round – just like fellow Welshman Joe Calzaghe did to Mario Veit in 2001.
Cleverly hopes to follow in the footsteps of Calzaghe by lifting a WBO world title when he meets the Iranian based German Murat for the interim light-heavyweight belt on September 18 in Birmingham.
The 23-year-old will be fighting on Frank Warren‘s Magnificent Seven event at the LG Arena, live and exclusive on Sky Box Office, and says he’s taken inspiration from a one-round blitz by Calzaghe nine years ago at the CIA in Cardiff.
Cleverly (19-0, 9 KOs) was a teenage schoolboy watching that show in the crowd, but will never forget the performance.
“Joe was great that night,” said Cleverly.
“It was occasions like that that made me want to become a professional fighter.
“It was a pretty miserable night to be German, and I’ll make sure Murat gets the same kind of treatment.
“My power has been improving with every fight as I begin to grow up. When I started out as an 18-year-old professional I was a gangly super-middleweight who didn’t really punch.
“Now I’m a big light-heavyweight and I’ve got the tools to take anyone out.
“I’ve got a lot of respect for Murat, because anyone who is undefeated is going to be dangerous and is going to be coming thinking they can win.
“But I’m going to be so positive right from the start because I remember how the crowd got behind Joe when he took it to Veit all those years ago.”
Tickets are priced at £40, £50, £80, £150 and £200 and are available from:
LG Arena
0844 338 8000
Ticketmaster
0844 844 0444
www.ticketmaster.co.uk
See Tickets
0871 220 0260
www.seetickets.com