‘In the Ring with’ Tyrone Nurse British light-welterweight prospect 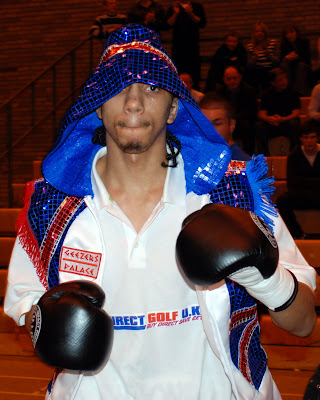 “Success is not the result of spontaneous combustion. You must set yourself on fire”    –    Reggie Leach
Unbeaten British light-welterweight prospect Tyrone Nurse (13-0 1KO)  from Huddersfield won his last fight against Johnny Greaves with a 5th round stoppage, his first TKO win in 12 previous points win victories, a sign that now he is adding punching power to his already sublime ring skills.
Trained by his father Chris Aston, former professional, and renowned Yorkshire trainer, who has coached  many lads from the area, notably Mark Hobson, James Hare and Dale Robinson.
“My dad always said that he knew I’d end up doing a bit of boxing. He said he could see it in me because I always liked to scrap but he never made me go to the gym, he let me decide myself.”

Nurse 19, who by day works as a freelance Graphic Designer, went onto to become one of the best young amateurs in the country and reached the junior ABA final at 60kg in 2007 but always had success in the pro ranks on his mind, after becoming disillusioned with the un-paid game.
The Yorkshire lad now hopes to keep his winning streak going, that he hopes will lead onto him winning lots of belts, British Boxers caught up with Tyrone for our ‘In the Ring with’ series.

‘In the Ring with’ Tyrone Nurse

When and how did you get into boxing?
I was about 10 going on 11 when I started to take to it, my dad had always messed about on pads with me from being about 7; but I never followed it up!
The main reason it all came about was when the likes of Dale Robinson and Mark Hobson were round at my house calling me a soft bastard so I told them I’d come down and do them all in. Been in the gym ever since!
Who was your first trainer?
My Dad, been with him from the start and he’ll be there at the end!

How would you describe your fight style?

Versatile, I can change to what is necessary! If I need to box I can box, if I need to be aggressive I can go forward! Counter punch if that’s what’s required.
Who influenced you as a young boxer?
I’ve always watched the Yanks from being young, so it would have to be the likes of Mayweather, Jones Jr, and Corrales.
Toughest/Best opponent you have faced?
Not really had a tough opponent yet, I’ve made fights tough by not listening and boxing to instruction.
Best I’ve fought would be Adam Kelly, but I’ve sparred that many top fighters that sparring tends to be a lot harder than the fights. (Amir Khan, Ricky Burns, Gary Sykes, Tim Coleman, James Hare, Dale Robinson, Carl Johansen, Jason Booth, Rendall Munroe the list goes on)
Toughest Part of being a boxer?
Dieting, but once you’ve got the first week or so out of the way it’s easy going.
Who do you wish you had fought or want to fight?
I’m easy I’ll fight anyone within reason, not giving away a ton of weight etc
Best fight you have seen?
Live – Calzaghe V Lacy (I was sat three rows away from front with my dad, and I wasn’t sold on Joe at that point and said Lacy stops him; after the 1st round I remember my dad saying “you still sure about your prediction”. I’ve been a fan of Joe since.
TV – Corrales V Castillo the first fight
Dream Fight? Who v Who?
Roy Jones Jr V Mayweather (obviously if they were the same weight etc)
Childhood Hero?
Never really had one to be honest…if anyone it would have to be my dad!

British – Nigel Benn
Favourite British fighters at the moment?
Kell Brook, Tony Bellew or Nathan Cleverly
What do you do when you are not Boxing?
I’m always in the gym; I’m the gym RAT!
Play XBOX, spend time with my family and girlfriend, and more than any of the others eat Chinese.
What would you do if you weren’t a boxer?
I do a bit of Freelance Graphic Design, so I’d stick at that!

Which British Boxers should we look out for?

There are quite a few talented fighters coming through at the moment.
Obvious names like Gavin, DeGale, and Liam Walsh etc
But names that are less well known Chad Gaynor, (pictured right) Navid Mansoori and Josh Warrington!
Your Motivation?
To be the best, and give myself something to be proud of and to pass down through the generations to follow.
What would you change in Boxing?
There’s nothing much to change, but I’d say decent gloves should be provided for every show; Winning, Reyes, Grant good gloves! Also judges scoring all fight irrelevant of rounds like the Americans do!
What music do you listen too?
I’m quite open to be honest I’m a hardcore Hip-Hop head, but I’ve got quite a lot of rock sort of stuff also Electro, and Soul.
Last book you read?

Favorite films?
Snatch has to be my all time fave, but I like quite a few others also.
Who would play you in a movie of your life?
God knows…..
Favorite Meal?
Special Fried Rice
BBQ Spare Ribs (plenty sauce)
Chips
Prawn Crackers
Fried Noodles with Bean sprouts
Usually costs about £13 including delivery – Bargain!
Best Holiday destination?
I’ve not really got around the globe yet, but Gran Canaria is lovely.
What other sports do you watch?
None, there’s nothing worth watching!
Best friends in Boxing?
All the lads at the gym, outside of the gym Inspector Steve Ray!

Megan Fox or my girlfriend!
Katt Williams – Comedian (right)
Lil Wayne – I like my music he’s my favourite artist
Tell us something we don’t know about you?
Erm…….I’m addicted to buying clothing
Who is the greatest British Boxer of all time?
Erm….I’d have to say Lennox as I wasn’t around for the bunch before!
Quick Fire Questions 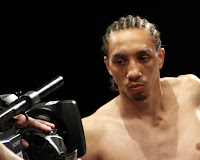 Original Lucozade
Animal?
Hyena
Website?
Deviant Art www.deviantart.com
One thing you cant live without?
Chinese Takeaways
Favourite Quote?
Reggie Leach – “Success is not the result of spontaneous combustion. You must set yourself on fire”
What does the future hold for you?
Lots more wins and some belts to hold my jeans up!
Thanks for talking to British Boxers Tyrone, good luck in your career
Interview by Chris Maylett for www.britishboxers.co.uk