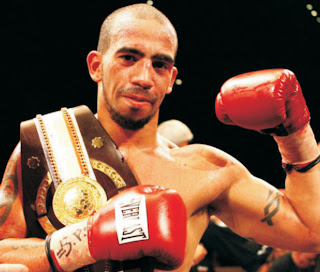 BRADLEY Pryce is hoping to establish himself as a top name in British boxing once more after smashing his way back into the reckoning at London’s York Hall on Friday night.

Pryce expressed belief before his clash with old foe Ted Bami – who inflicted his first career defeat in 2002 with a KO two seconds before the final bell – that a loss would consign him to the role of journeyman for the rest of his career.
However, after a crushing second-round stoppage victory, Pryce, still only 29, believes he can frighten the life out of the welterweight division in the UK.
Back at his natural weight after a five-year absence, Pryce believes he’s now set for a career swansong under the stewardship of new trainer and former Team Calzaghe stablemate Gary Lockett.
“I feel really good, very relieved that my hard work has paid off, and happy that I still have a boxing career and reason to be optimistic,” Pryce reflected.
“I knew my fitness and my diet had improved since starting with Gary Lockett and it has really done wonders for me.
“I am not saying anything against (former trainer) Enzo Calzaghe, but things had just gone a bit stale for us both and I feel like I’ve gone to a new level.
“I did the weight right (Pryce has been troubled by an eating disorder in the past), but Gary has monitored my weight every week and all my meals are pre-planned now.
“Even on the day of the fight I was being told by Gary what to eat. No fast food, sensible meals, plenty of fluids, I felt a million dollars when I stepped into the ring.
“And I feel like I have taken all my power down to welterweight with me. Once I caught Ted with that punch (a sweeping and devastating right hook) it was all over and the big shot is something I have been working on.
“It has taken me ten years to find my natural weight, but I feel confident that I can give any welterweight in Britain a run for their money and I am definitely after the top guys like Matthew Hatton and Kell Brook.”
A thrilled Lockett felt Pryce had reaped his own reward.
“Bradley has had a terrific attitude and has been receptive to what I wanted to do with him in terms of discipline and diet,” he explained.
“He was a bit nervous in the first round, but all I asked from him was that he bided his time and stuck to the plan, because we knew he’d be miles fitter than Bami and just needed to get through the first couple of rounds.
“But once Bradley got a sniff he closed the fight beautifully, he’s got tremendous power, he really is a puncher and that would be the case one or even two weight classes up.

“He’s a dangerous opponent and hopefully we can get him another fight quickly. If he keeps doing what he is now, he will be in a title fight sooner rather than later.” By Michael Pearlman