Fist of Fury Tyson will fight anyone 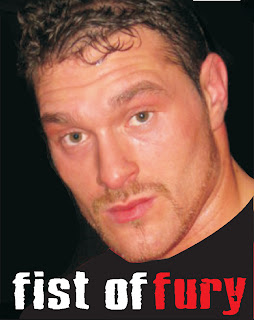 Tyson Fury is not quite love him or hate him Marmite just yet, a lot of boxing fans are not that sure what to think of the confident, brash Manchester heavyweight prospect.
We like confidence in a fighter, all the best ones have that in abundance, what we are intrigued to see is if this 22 year old prospect can back up his claims and produce the goods, so far he has and whatever you do think of the young man, credit to him in this day and age, he is willing to fight anyone.
Unbeaten Fury (11-0, 9 KO’s) this week put himself on stand-by for the Frank Warren, Magnificent Seven showcase on September 18th in Birmingham, when British heavyweight champion Derek Chisora and Commonwealth titlist Sam Sexton clash, and should one of the fighters become injured during training and have to pull out of the fight, English champion Fury will jump at the chance to get an early shot at either.
Fury who who stands a towering 6ft 9ins tall, and weighs in at 19 stone, is in training to fight undefeated Canadian heavyweight champion Neven Pajkic (13-0, 9 KO 5) in Pajkic’s home town of Ontario on the 4th September, but would be willing to enter the ring just 2 weeks later in Birmingham, should the opportunity occur to replace Sexton or Chisora.
“If either Derek of Sam decide they would rather be somewhere else on September 18, I’m ready to step in,” said Fury. “I am in training for my next fight anyway, so will be in shape and ready to beat either of them. “I won’t be turning my phone off just in case.” he added.
Fury is already lined up to fight the winner of the fight anyway after his ninth round knockout of John McDermott in a British title eliminator in June (Fight video below) It is a breath of fresh air to hear a young up and coming fighter in the spot light with the old school boxing analogy of ‘have gloves will travel’ attitude.
FURYS LAST FIGHT – Tyson Fury vs John McDermott 2

He is also lined up to fight in Manchester on the 25th September in at the Daytona Indoor Karting Centre, which lies in the shadow of Manchester United‘s football ground Old Trafford, opponent TBA. So which ever way it all pans out Fury looks to have a busy start to the new season with what could be a packed September schedule.
By Chris Maylett