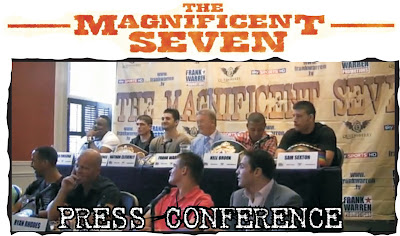 “I’m 30 years now as a Boxing Board of control promoter, and Ive got to say for all the cards I’ve put together, I’ve had some exciting shows I’ve been involved with over the years, I think this is one of the most competitive shows I’ve been involved in, and for any fight fan it’s got to be a must.” Frank Warren
Nathan Cleverly interview – The Welshman fights for the WBO Interim light-heavyweight world title against the good unbeaten German Karo Murat. “It’s a massive opportunity for me and the chance to prove I’m a world class fighter.” says Cleverly
Matt Macklin says he’d rather beat up Darren Barker than take a world title eliminator. “I don’t see how he can beat me? the calibre of opponent he has fought, against the calibre of opponent I’ve fought, its just a mismatch, whatever he brings it wont be enough.”
Sam Sexton and Derek Chisora will meet for a second time, it is 1 nil to Chisora, but this time the British and Commonwealth heavyweight titles are on the line.
Sexton was due to fight for the British title in May against Danny Williams, but had to pull out because his mother was ill, Chisora stepped in his place and won the belt off Danny Williams.
“It was a very difficult period for me personally, but I’m back focused on boxing and I’ll win it for her,” he said.
“I am a totally different boxer to the one who lost to Chisora two years ago. I became a man when I beat Martin Rogan and I’ll avenge the defeat.”
But Chisora insisted that his Lonsdale belt was going nowhere.
“Will I beat him? Yeah, of course I will, I’ll fight anyone in the country. Tyson Fury, John McDermott, Danny Williams, Sam Sexton, it makes no difference to me. They are all getting knocked out.”
Previews on all the other fights coming soon, What are your predictions?