Who’ll Make it to the Heavyweight Battle of Britain 2017? 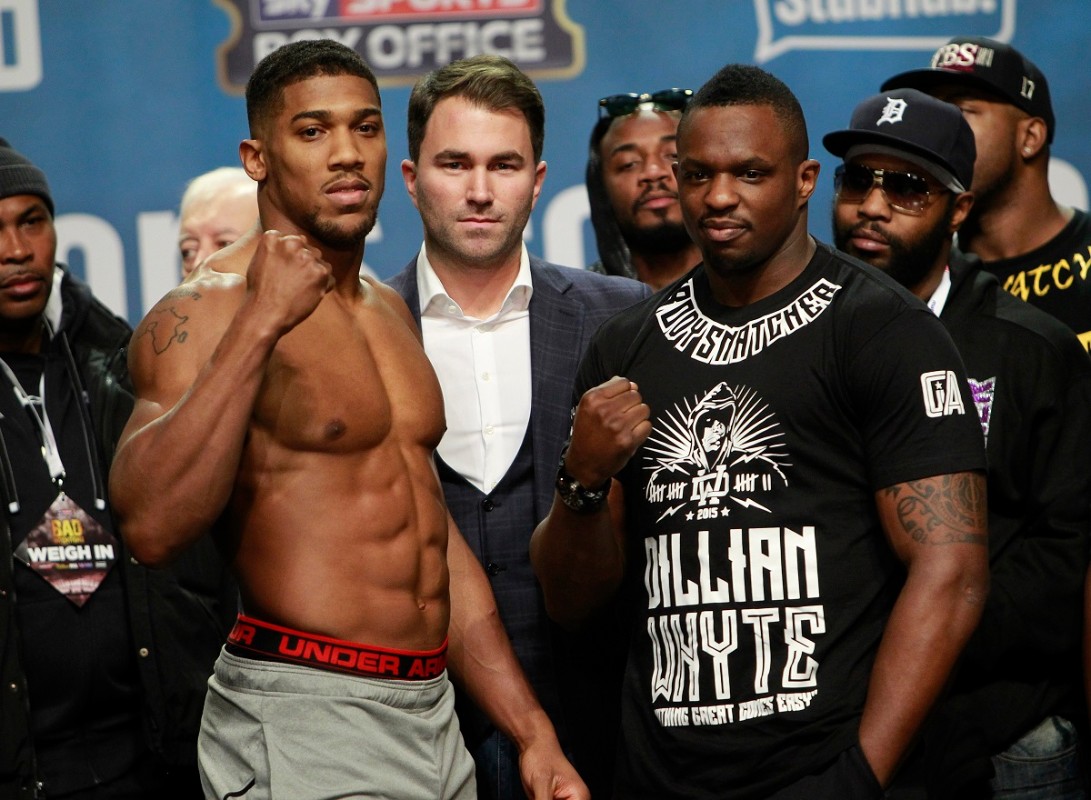 Anthony Joshua and Dillian Whyte have already clashed, will they meet again in 2017? pic: Lawrence Lustig

As we move towards the end of what has been a fascinating year for British boxing, it looks like it will be going out with a bang in December. Boxing loves to sow seeds and the December 10 bill at the Manchester Arena could very well be doing that.

There’s nothing larger than an all-British fight for the World Heavyweight title and that could happen again in 2017. It sums up the strength of the heavyweight division that there’s more than one candidate for such a fight.

Anthony Joshua currently sits at the top of the IBF tree but chances are more titles could be heading in his direction next year. If – as expected – he gets past Eric Molina next month, then a showdown with Wladimir Klitschko looks on the cards. Joshua is our favourite to get past the former champion, and if that happens it will be time to get ready for another Battle of Britain.

On the Joshua v Molina undercard, we have Dillian Whyte defending his British Heavyweight title against Dereck Chisora. The two have already embarked on a bitter feud leading into their title bout. It’s got so bad that the British Boxing Board of Control don’t even want the pair to set sight on each other again before the big fight.

Whyte v Chisora isn’t just for the British Heavyweight title – it’s also a WBC Eliminator. The British champion is ranked 10th by the WBC and a win against Chisora -, something that at the time of writing those of you betting at Betway can get 4/9 on – will really see his career heading in the right direction. That’s because if Whyte were to follow that win up with another win over a ranked opponent, then he’d be at the front of the queue for a shot at Deontay Wilder once he’s recovered from injury. So, the seeds begin to be sown, not just for Whyte to get the WBC Champion but to set up an all-British World Heavyweight title match, possibly with all the main belts on the line.

It’s been a year since Joshua had the toughest fight of his pro career against Whyte and there were times that his unbeaten record looked to be at risk. The two would be guaranteed to put on a lively pre-match build-up having previously shown their dislike for each other. Joshua v Whyte two in the ring for the world title would be pure box office gold.

What if Chisora was to upset the boat next month and again become British Heavyweight Champion? It’d re-ignite a fading career for sure and possibly get him that fight against Wilder. However, his best days are behind him and it’s hard to see him getting back into

world title contention – unless he puts in a much better performance than he did against European Champion Kubat Pulev.

There are of course other contenders. What happens if Tyson Fury gets his act together this coming year? Recovering his health is the most important factor but if he can do that and win a comeback fight, then Fury v Joshua this time next year could very well become a reality. What a dream, eh? The British World Heavyweight Champion against the former Champion who never lost his titles in the ring.

No one can leave David Haye out of the equation either. He seems booked for a bout against cruiserweight champion Tony Bellew but after that, he simply must be getting close to a title shot, as he’s currently ranked highly by the WBC, WBO and IBF – and we all know who currently holds the latter title.

And let’s not forget to throw in David Price – if he could finally get a win against a live title contender – or even Hughie Fury, who is somehow ranked in the top ten by the WBO, and the chances of an All-British World Heavyweight title fight in 2017 are looking more and more likely, perhaps not even involving Anthony Joshua if the titles really fracture in the coming months. British boxing is certainly going into this new year with plenty to look forward to in the heavyweight division.

Callum Smith vs Luke Blackledge: A Tale of Two Halves