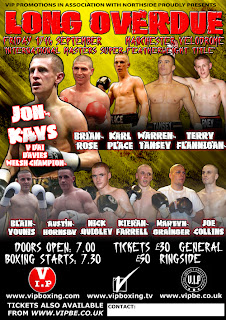 It is always a relief to get back into the “swing of things”. Especially when the swinging involved consists of two gloved fists eagerly awaiting to kick off 2010’s boxing calendar with a bang, and record an impressive performance.
In the instance of September 17th, 2010 one of the combatants vying for supremacy will be Ashton’s own Jon “2 smokes” Kays.

Speaking on the fight, Kays has expressed great confidence. He credits a lot of this to working with highly regarded trainer Bobby Rimmer, (below right on pads with Gomez) stating “Bobby has brought me on massively over the past 19 months I have been working with him. He has spent a lot of time improving my technical side and working on my strength”.

Kays appears to relish the opportunity to work with a man who has worked with Light-Welterweight great Ricky Hatton, as well as Michael Gomez and explained that training alongside Blackpool favourite Brian “The Lion” Rose and Tony Jeffries “has really brought me on”.
Kays sees the International Masters title belt as a considerable tool which will help advance his boxing career, but is in no way getting complacent, ensuring that the Davies fight is the only thing he is concentrating on at the moment.
“I’m looking to pick up the (International) Masters title and gain the experience of being in a 10 round fight which will hold me in good stead for any future fights that come up.”
His ambition stretches to future domestic glories; “I’m hoping to move on from the masters, perhaps with an English or British eliminator after this…but I’m not looking past Dai Davies.”

“2 smokes” is anticipating an exciting contest; “I’ve heard he’s a tough lad who will come and have a go and I hope he does because it will bring out the best in me and make it an exciting fight for the fans”.

Also featured on the bill are the hard-hitting Super-Middleweight Warren Tansey, who will be looking to build on his perfect knockout ratio, and Brian Rose, who will most certainly be looking to bounce back with a win following his TKO defeat to Max Maxwell in 6 rounds last May.
They will be joined by promising local Manchester prospects such as undefeated Light-Welterweight Karl Place and southpaw Terry Flanagan.
To add to the extravaganza, the evening also includes contests involving a number of other young rising VIP boxing stars including Blain Younis, Austin Hornsby, Nick Quigley, Marvin Grainger, Joe Collins and Kieran Farrell.
All in all, an exciting night of boxing looks to be on the cards and should offer a satisfactory pre-cursor to what will be an exciting weekend of boxing in its entirety.
By Jamie Albrecht.

Tickets priced £30.00 and £50.00 ringside are available from all the boxers or www.vipbe.co.uk