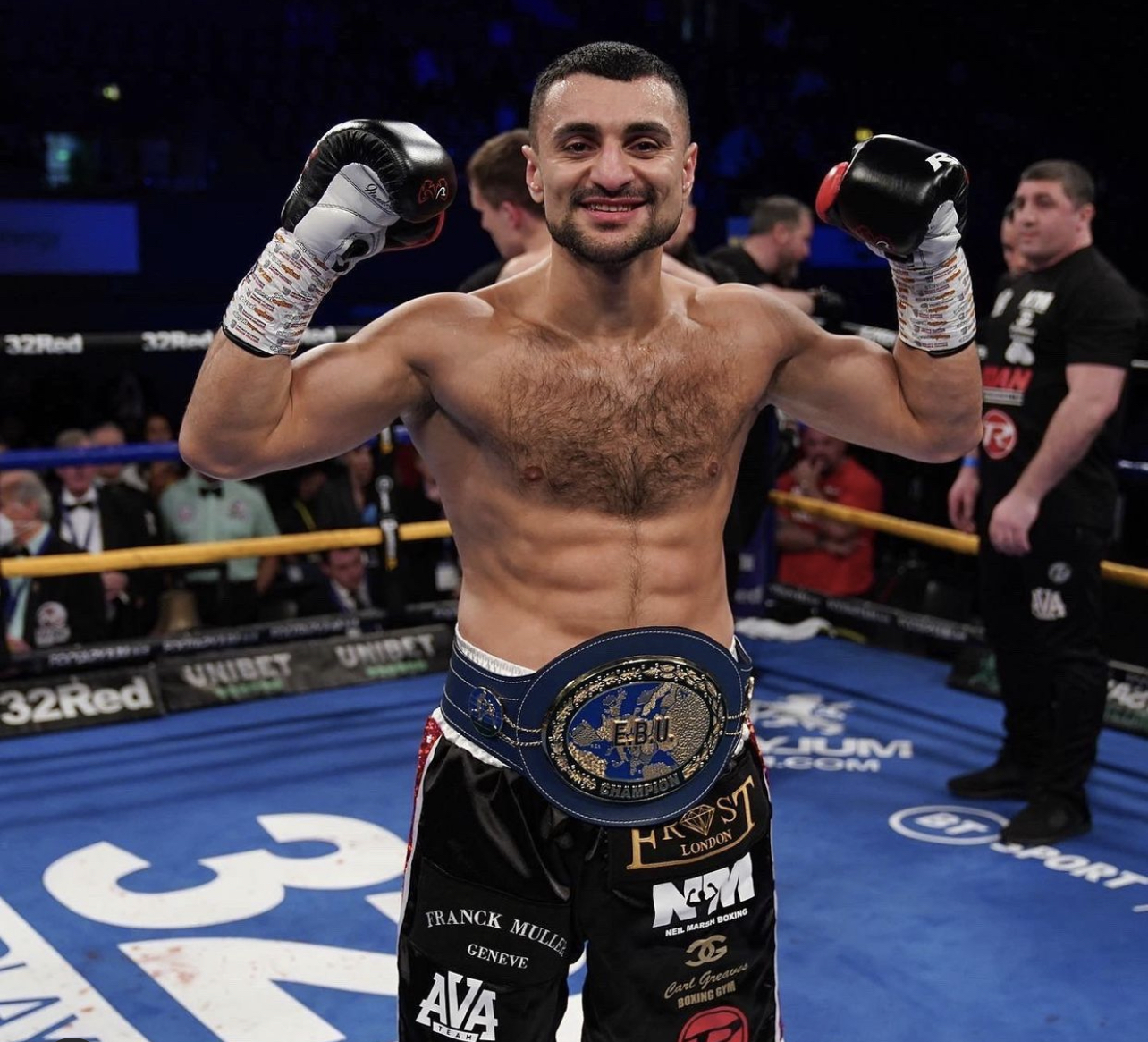 David Avanesyan made the fifth successful defence of his European title at welterweight with a one-round blowout of Oskari Metz at London’s Wembley Arena. The Russian rocked the Finland man with a hard left hand before placing Metz on the seat of his trunks with another powerful left on the inside. Metz’s body language spoke volumes and he didn’t look too eager to continue. He did eventually climb to his feet, but the writing was on the wall and the Russian jumped on him with sharp straight lefts and barrages of hooks on the inside, crashing against the Finnish fighter’s chin. The referee administered a standing count to the perplexment of many watching and eventually rightly waved the fight off to mark a successful Queensberry debut for Avanesyan. Promoter Frank Warren promised to land a world title challenge for ‘Ava’ who is no doubt one of the most avoided fighters in the UK despite his high rankings with several governing bodies, including the WBC with whom he is ranked number two. Avanesyan now moves to 29-3-1 as a professional while the fight handed Metz his first pro defeat, his record now 15-1-0 respectively.

The main event for the evening however saw Britain’s Hamzah Sheeraz exorcise some of the demons looming from his previous outing against Bradley Skeete which ended in controversy. This time around, Sheeraz, in his first fight at middleweight, was dominant for as long as the fight lasted when he blasted through Jez Smith inside two rounds. The first saw good use of the jab early on from Hamzah before a brilliant counter left hook caught Smith’s chin as he stepped in with a jab, sending him to the canvas. Smith saw out the remainder of the round but the second began with more stiffSheeraz jabs before a left hand again wobbled Smith, followed quickly by a pin-point straight right which again sent Smith down. This one was heavier and the referee John Latham waved it off within seconds, Smith’s corner simultaneously throwing in the towel anyway to spare their man further damage.

Sheeraz hinted at the impact of backlash from social media had on him following the Skeete fight, and one could not help but feel sorry for him. After all, it was not his fault the referee did not disqualify him, and he’ll be glad to have got that monkey off his back as he moves towards a new lease of life up at 160lbs.

Two domestic lightweights who appear absolutely certain to be on a collision course with each other providing both keep winning also ran out winners on the undercard at Wembley Arena. Mark Chamberlain forced Jeff Ofori to retire in his corner after the fifth after dominating with his jab from medium range, regularly landing with a straight left against a Jeff Ofori who didn’t look at it all night having only taken the fight at four weeks’ notice. Sam Noakes meanwhile earned a stoppage inside four against Italy’s Vincenzo Finiello, impressing with the jab early on against a man who did not appear willing to fight after feeling the power of Noakes in the early rounds. Noakes did however manage to find a right hook to the body which appeared to wound the Italian, the Maidstone man throwing two right uppercuts which rocked Finiello’s head back. A straight right caught the Italian’s chin clean with his back to the ropes and he was bundled to the canvas after a series of hooks and uppercuts. Finiello didn’t fancy climbing to his feet and failed to make the count. With both men maintained their undefeated record, a big domestic showdown at 135lb seems certain for later in the year. Chamberlain moves to 10-0-0 while Noakes’ record now stands at 9-0-0 respectively.

Bright super-bantamweight prospect Dennis McCann (12-0-0) ran out a comfortable winner on points over eight rounds (by scores of 79-73 x3 respectively) against Tanzania’s Charles Tondo. McCann started the bout well, showing good punch variety and shot selection as he rattled off one-twos and body shots against the Tanzanian. The rounds were tighter in the middle portion of the fight however, McCann still taking the majority of the rounds but was being made to work harder, Tondo landed a few straight lefts of his own in the fourth. McCann was a deserved winner at the sounding of the final bell though, letting his hands go in the final few rounds with sharp one-twos and superb footwork as he drifted in and out of range. McCann moves to 12-0-0 now as a professional.

Down at super-featherweight, Royston Barney-Smith made his professional debut in impressive fashion, running out as a 40-36 winner over four rounds against Adan Martinez of Spain. Barney-Smith enjoyed huge success with the straight left hand and clearly carries power despite only being eighteen years-old.

Further down the card, Masood Abdulah scored his fourth stoppage in as many pro outings with a technical knockout in the final of six scheduled rounds against Sangdeep Singh Bhatti. Super-lightweight Henry Turner secured his seventh professional win with a third-round stoppage of Ivan Njegac, while Sonny Liston Ali scored his third win over six, sending Lee Glover to the canvas twice in the process. Khalid Alimeanwhile ran out as victor in his second professional outing with a four-round points decision over Josue Bendana.