Abraham And Froch Come Face-To-Face ahead of thier fight 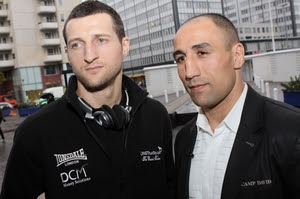 King Arthur Abraham´s first face-to-face meeting with Carl “The Cobra” Froch on neutral territory was certainly one to remember as they wasted no time to exchange pleasantries during today´s kick-off press conference in Helsinki, Finland.
.
In Group Stage 3 of the Super Six World Boxing Classic, the two boxers will lock horns at the famous Hartwall Arena on November 27, with the vacant WBC Super-Middleweight Title on the line.
.
Froch (26-1, 20 KOs) said he found it odd that Abraham calls himself “The King” and also dresses like one. “Abraham has a picture of himself posing as a king at his house,” Froch stated. “He wears a plastic crown and a feather coat. I find that very strange and it tells you something
about him. He will certainly not be the king after we have met inside the ring. I am going to stuff him like a chicken.”
.
Abraham (31-1, 25 KOs), as always, had a speedy reply, saying: “I will be happy to give him a plastic crown after I am done with him. He will never get a real crown. And he will not get the WBC Title either. I think he is a good puncher but he is an even better talker. I don´t like to talk much before a fight. I prefer to let my fists do the talking in the ring on November 27.”
.
Froch also made fun of Abraham´s size, saying he brought in undersized
sparring partners of around five feet. “That will be very good preparation for
our fight,” Froch stated. “But I have a lot of respect for Abraham. He has good power and he is a fair sportsman. I am ready for an explosive fight. There will only be one winner and that is the Cobra.”
.
Abraham replied: “Inside the ring, size does not matter. All that matters is the head. And Carl Froch better have a clear head on November 27. If not, I will take it off.”
.
Abraham´s coach Ulli Wegner believes that Froch will be in for a painful night. “I don´t think he has realized yet how hard Arthur can punch,” the seven-time German coach-of-the-year said.
“Once he finds out on November 27, it will be too late. We have prepared well for Froch. We have analysed him closely and know that he is a dangerous opponent. Froch is a tough guy, a former world champion and he has proven himself at Super-Middleweight. But he will not beat Arthur on November 27.”
.
Promoter Mick Hennessy said: “Styles make fights and with two explosive
warriors such as Abraham and Carl going at it, this will be a fight-of-the-year candidate. It will be a true battle and I have no doubts that Carl will emerge victorious.”
.
Abraham´s promoter Kalle Sauerland holds a different view. “We
have respect for Carl Froch but I cannot wait for Arthur to give him a proper
beating,” he said. “It will be a spectacular evening for the fans not just in
Helsinki but all over the world. Arthur has basically been training since April
and he cannot wait to finally get into the ring with Froch. It will be an explosive encounter, and mark my words, Arthur will be the new WBC Super- Middleweight Champion on November 27.”
.
Tickets are available via the Finnish ticket hotline + 358 600 900 900 and
online at www.lippu.fi.
.
Picture Credit: Adam Monaghan / www.adammonaghan.com
.