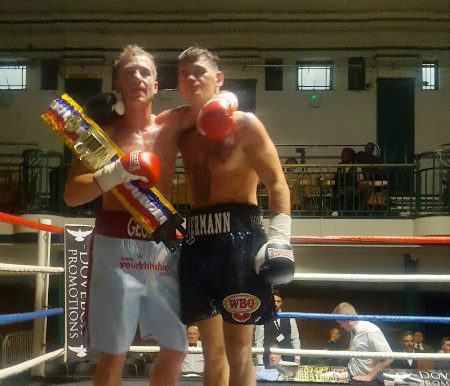 It was ‘Make or Break’ time for those entering the ring at the infamous York Hall last night!

The action-packed event saw DoveBox Promotions present a fantastic card, filled with top prospects and exciting fights. The line-up was topped with a much-anticipated main event battle for the British Challenge belt, and a vocal crowd, who clearly had their favourites!

Shaquille ‘The Black Mexican’ Day took to the ring to face Kevin McCauley for an entertaining 4×3 minute super welterweight bout, which saw McCauley adopt a ‘showman’ approach and made for a very lively fight!

Round 1 began with a very agile Shaquille moving easily around the ring, maintaining a steady pace and working his punches well. Kevin returned the shots, however it was Shaquille that found the point scorers in the round, landing hard hitting body shots and backhands.

The Black Mexican continued to have success, utilising his jab well throughout round two and landing good body shots. Kevin responded with powerful body shots of his own, whilst talking to his opponent, seemingly mocking the power of his blows. Undeterred, the Black Mexican remained composed, busy, and front footed throughout.

Round 4 saw Kevin enter the ring front footed whilst delivering quick combinations and continuing to mock his opponent’s offerings. However, Shaquille dismissed these attempts to unnerve him, and continued as the more dominant of the two.

Each round saw Shaquille’s skill and technique take the upper hand against showman Kevin, and although the lively exchange made the fight a crowd pleaser, skill most certainly outweighed jest, and 23-year-old Shaquille walked away with a well-earned 40-36 win on points, and a still undefeated professional record.

32-year-old super middleweight Jimmy Smith was definitely one of the crowd’s favourites when he entered the ring to face Polish born Daniel Urbanski for a 4×3 minute bout.

Round one saw Daniel Urbanski take an over eager approach, slipping to the ground whilst throwing a flurry of punches. Jimmy adopted a more calm but busy style, maintaining a steady pace and managing to land his well thought out shots.

His busy boxing style continued throughout the rounds and he walked away with a well-deserved win on points (40-36).

With 3 wins now under his belt, and remaining undefeated in his professional career, Jimmy Smith is definitely one to watch!

Super lightweight Cheznie Hawkins also bought his fans, with the crowd backing him all the way during his 4×3 minute fight t against Slovakian, Rudolf Durica.

Round one saw both boxers keep a steady, slightly back footed approach, gauging an idea of what they each faced. It was Cheznie however who began to take the lead during the second half of the round.

Things stepped up a gear in round two, which saw Cheznie land a big right hand that really knocked Durica, and paved the way for a round dominated by the 21 year old favourite.

The third round saw Chesznie enter the ring all guns blazing, landing quick and well placed combinations. He went on to box the round tactfully, easing off onto the back foot mid-way through, and putting up a good defence against Durica.

Chesznie continued to deal out short burst combo’s and box in a technical, but dominating manner, at one point knocking his opponent out of the ring and sending the crowd wild!

His predominantly front footed approach and precise combinations saw Cheznie walk away with a well-deserved win on points, with the judges scoring the contest 60 points to 55.

From the very first bell southpaw Toms delivered powerful right hands and great combinations. Hermann responded with well placed uppercuts, but the round was largely dominated by Toms, who backed Hermann against the ropes several times and had the upper hand throughout.

Round two bought with it a very front footed entrance into the ring by Hermann, who landed a big right hand on Toms. However, the tables soon turned and the round once again became dominated by Toms, who landed big and powerful blows throughout and maintained a front footed approach.

Round 3 saw a very keen, and slightly wild Hermann, who’s perhaps over eager approach resulted in him falling to his knees whilst attempting to land a hurried combination.

In contrast, Toms kept his punches precise and well placed. The round continued in this manner, with Hermann delivering a faster pace, but having much less success in landing blows in comparison to the more poised and technical Toms.

Round 4 was a heated battle, with a rapid exchange of punches and both fighters giving it their all. Once again, Toms proved his dominance, backing Hermann against the ropes and landing a strong jab as he tried to manoeuvre away.

Round 5 was most definitely make or break time! Toms dominate once again, backing Hermann onto the ropes and landing powerful body shots. Hermann worked his jab well, but was overpowered by Toms, who took the opportunity to deliver fast and strong combinations, resulting in Hermann’s corner throwing in the towel, and the bout being called to a halt at 2 minutes and 20 seconds.

It was a fantastic and well deserved win for Ryan Toms, who walked away with the British Challenger belt and a very positive mark on his professional boxing record.