Cassius Connor has left nothing to chance as he prepares for his second outing as a professional boxer at Miranda Carter’s Left Jab Promotions ‘10: 10: 10:’ event this coming Sunday at York Hall, Bethnal Green, London.

.
Connor, who drew his first pro fight against ‘Dynamo’ Daryl Setterfield at the K2 Leisure Centre in Crawley back in February, not only changed his training base and team but also secured top class sparring in readiness for his October 10th showdown with Battle.
.
Following a grueling training session, under the watchful eyes of his new trainer Alec Wilkey at the Ultrachem TKO Boxing Gym in Canning Town, Connor took a little time to talk about his preparations for the fight, “I’ve been training hard, double hard. I’ve got a new coach since I moved from James Cooks’ gym to the Ultrachem TKO Gym. It’s a great gym and a great team around me with Johnny (Johnny Eames), Derek (Derek Grainger) and my main coach Alec (Alec Wilkey).
.
Alec’s a lovely fella, he puts the time in with me. He’s changed everything, shows me everything, done my boxing really different. I’m now using all my assets more, he’s improved my speed, my power and that. I’m not the back foot fighter I was in my first fight.
.
Alec’s got me in the right mindset, everything’s gone double well. I’m fit as a fiddle and ready for action on the 10th.
.
I haven’t seen him fight but I’ve heard that Adam’s a come forward fighter and that he hasn’t got much other than his power and brawn, so I’m just gonna look towards my assets. Use my jab, I’ve got a good jab. Speed, in and out. Box him and move off, just be clever and don’t mix it up with him. If it comes to mixing it up with him, then I know I’ve got the assets to handle it. He’s got nothing to bring to the table that I don’t think I can deal with.
.
I’ve been sparring with the Southern Area Lightweight champion Ben Murphy, Ricky Boylan. Also sparred a couple of rounds with Bradley Skeet. I had the best sparring there’s nothing I’m not prepared for. Ben’s an absolute roughneck, he’s a powerhouse, a pit bull. With Adam Battle’s style its not going to be anywhere near as intense as those sessions. I’m just gonna get behind my jab and then get him out of there, sorted.”
. 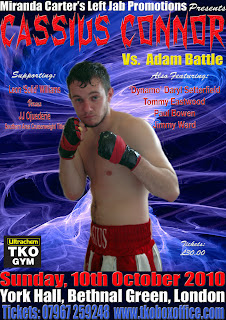 .
The undercard includes Ashley Theophane versus a yet to be named opponent, Jimmy Ward versus Tommy Marshall, Connor’s Ultrachem TKO gym mate ‘Dynamo’ Daryl Setterfield locks horns for the second time with Ryan Toms in a fiery rematch, whilst Gary Boulden and Toks Owoh battle it out against yet to be named opponents.
.
Doors open at 2pm and the show begins at 3pm
.
Tickets for Miranda Carter’s Left Jab Promotions ‘10: 10: 10:’ event at the York Hall, Bethnal Green, London on Sunday 10th October 2010 are priced £30 (Unreserved).
.
For tickets call: 07960 850645, book on-line at www.tkoboxoffice.com or in person at The Ultrachem TKO Gym, Gillian House, Stephenson Street, Canning Town, London E16 4SA.