Callum Johnson and the Prince ‘In the Ring with’ British Boxers

Commonwealth Gold medal winner Callum Johnson, hit the headlines again this week when he announced he would be leaving the amateurs to sign professional forms with Frank Warren and new boxing manager Prince Naseem Hamed.

.
The bright prospect from Boston in Lincolnshire, boxed for Scotland as an amateur, qualifying through his grandparents, and had harboured the hopes of staying on and winning Olympic gold at the London 2012 games.
.
But after some soul searching and the fear of disapointing his amateur team, Johnson decided it was time to lose the vest and the head guard, putting pen to paper on a three-year promotional deal with Warren.
.
The lure of the professional game and the opportunity to work with Warren and British boxing legend Hamed, was an offer he just couldn’t turn down.
.
“It’s fantastic to turn professional under Frank Warren who is the man to guide me to achieve my dream – to become world champion.” said Johnson.
.

“When I was a kid, Naz, Nigel Benn, then Joe Calzaghe and Ricky Hatton were the big stars and Frank promoted all those guys,”

.
“I have the talent and he has the promotional knowledge and skills and together we will make a knockout team,”
.
“It’s every boxers dream to turn professional and become a world champion, so I jumped at the chance to turn over,”

The 25 year old light-heavyweight, will make his debut in Glasgow on December 4th, when Warren will promote ‘The Monarch of the Glen’ show at Glasgow’s Braehead Arena, topping the bill is Ricky Burns, who will be making the first defence of his WBO World Super-Featherweight title against Andreas Evensen. An opponent for Callum as not been confirmed as yet.
.
“It has been my dream ever since the age of 15, like any sportsman, to turn professional.”
.
Callum, in London last week to sign his contract, spent Saturday in Warren’s private box watching Arsenal at the Emirates, added: “I have been told I will have a title fight within 10 fights and it would be brilliant if I could bring that contest to Lincolnshire.
.
“Hopefully one day I can bring a world title back – I am very confident I can. But I am going to have to start at the bottom and work my way up, just like I have done through the amateur ranks.
.
“I just can’t wait to get started, expect fireworks that night, I’m just looking forward to getting in the ring without a headguard and vest on and with smaller gloves – it is going to be something else.”
.

“I know it’s a long way for fans to travel to Glasgow but hopefully I will have good support,” added Callum.

.
“I will just take it one stage at a time, I’ll will still be training with my dad, we are a team and also with my coach in Lincoln. I also hope to get over to the States for three or four weeks at a time to work with coaches over there.”
.
Prince Naseem is confident that he as chosen a boxer to get his managerial career off to a flying start and believes Callum as got the talent to emulate himself and go on to claim a world title.
.
“I’m really really excited with Callum and I’m looking forward to help guide his career alongside Frank Warren. Callum really is a very special talent as we saw when he won the Commonwealth Games, and I believe he has the potential to win a world title. It’s going to be an exciting journey and I’m with him all the way.” said Hamed.
.
Callum hopes to follow in the footsteps of Prince Naz – Highlights Video of Hamed in action

.
British Boxers caught up with Callum this week for our ‘In the Ring with feature’

When and how did you get into boxing?
When I was 12 years old, my dad took me to the gym in Boston, Lincolnshire
. 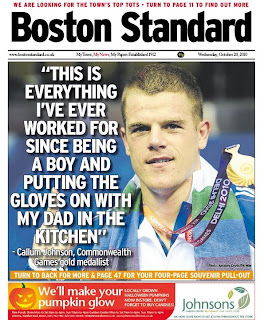 Who was your first trainer?
My Dad
.
How would you describe your fight style?
Box fighter
.
Who influenced you as a young boxer?
My Dad
.
Toughest/Best opponent you have faced?
Nikita Ivanov Russian champion from the amateurs
I won on points
.
Toughest Part of being a boxer?
Being away from family and my son
.
Who do you wish you had fought or want to fight?
The world amateur champion at 81 kgs because i believe i may have had the right tactics and style to beat him
.
Best fight you have seen?
Micky Ward vs Arturo Gatti
.
.
Dream Fight? Who v Who?
Mayweather vs Pacman
.
Childhood Hero?
My Dad
.

World is Mayweather and British Ricky Hatton
.
Favourite British fighter at the moment?
Thomas Stalker he is an amateur
.
What do you do when you are not Boxing?
chill with my family and friends
.
What would you do if you wasn’t a boxer?
Be a wheeler dealer
.
Which British Boxers should we look out for?
Me (smiles) –  Thomas Stalker in the Olympics
.
Your Motivation?
To be the best i can be for myself and my family
.

What would you change in Boxing?

Give the fighters more money like footballers
.
What music do you listen too?
Anything and everything
.
Last book you read?
Boxing news
.
Favorite films?
Action films
.
Who would play you in a movie of your life?
Matt Damon
.

Steak in an Italian sauce
.
Best Holiday destination?
Las Vegas even though I haven’t been there yet
.
What other sports do you watch?
Football
.
Best friends in Boxing?
All my amateur team m8s from the commonwealth games
.
Which 3 people would you be stranded on a Desert Island with?
My Dad to train me my Mum to cook and clean and my Girlfriend for well……..
.
Tell us something we don’t know about you?
I’m addicted to Facebook
.
Who is the greatest British Boxer of all time? 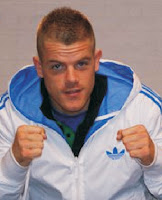 .
Haye or Lennox?
Lennox
.
Paquiao or Mayweather?
Mayweather
.
Jab or Hook?
Hook
.
Head or Body?
Both
.
WBC or WBA?
WBC
. 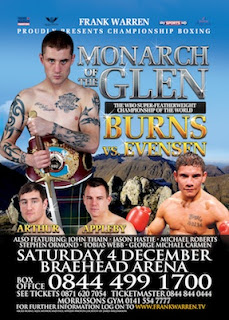 Thank-you for you time Callum and all the best of luck with your professional career.