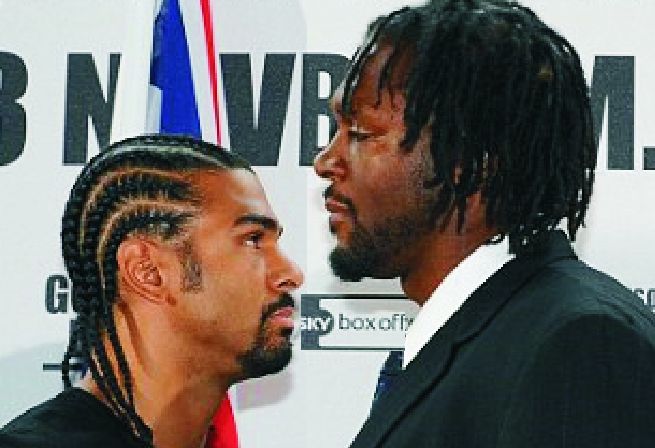 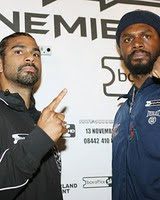 There has been a very bitter taste left in the mouth of British boxing this week, in the aftermath of Audley Harrison’s ‘Non’ entity championship challenge of David Haye’s heavyweight title.

With calls of betting scandals and cries of ‘Fix’ echoing through the corridors of our game, boxing has been been dealt more than a feeble jab – but a sickening blow in the floating rib, an hard knock that boxing could well have done without, scarred publicly on its biggest stage, at a time when it needs all the positive input it can.
Fan’s who got behind the fight and paid good money to watch it live or on Sky Box Office, have felt short changed, conned after Harrison’s no show, and anger has been further fuelled by the infamous footage of what appears to be Haye signaling to Harrison ‘Now’ just before Haye lands and Harrison drops, ultimately ending the fight.
Although Harrison did rise and carried on, he obviously had no intention of fighting back and the referee stopped the fight in the 3rd round after two previous rounds of inactivity where neither fighter thrown a shot in anger at the other, and the boos of the knowledgeable Manchester boxing crowd rang out, as both circled each other without engaging.
Harrison whatever way you look at it was a complete Jekyll and Hyde character, from the over confident protagonist, who’s pre-fight persona completely changed when he stepped inside the ropes last Saturday night to face Haye, only to suffer stage fright at the final hour.
The former Olympic Gold medalist was introduced in the ring as ‘The always dangerous Audley Harrison’ by fight MC Jimmy Lennon Junior but the only danger that appeared on the fight risk assessment, was the danger of him ‘falling on top of Haye’ as he tumbled over from the first meaningful shot.
Harrison’s confidence before the fight and his constant predictions of winning at all costs to fulfill his destiny and realise his fate, were evidently lacking on the night and the bravado turned to anxiety as Harrison legs turned to jelly.

The drama of the whole event from beginning to end had boxing fans getting caught up in the big fight razzmatazz, but none of us could have written a worse ending to the out-come, and whatever personal opinions people have of the fight, it doesn’t compensate for Harrison’s complete lack of effort, ‘Fix or not’ surely A’ Force would have chosen a better role in the script than something like this –

‘Ok mate, There is a few bob in this job for you, you act like a man possessed almost delusional in the build-up to the fight. You will get lots of publicity and it’s your job to con the dubious public and even the fight critics, into believing that you really will win the fight and it will be well will worth watching as you fulfill your destiny of becoming heavyweight champion, after a career of diversity. Unfortunately though destiny will be dealing its hand of fate and it isn’t good news! You will go a couple of rounds in there at least, but on the night of the show, whatever you do, don’t hit back just in case you land a lucky punch. And finally when you hear the call ‘Now’  and you get hit, drop on your back like a sack of spuds, get up and then show absolutely no resistance, until the referee jumps in”

It’s just not the part you would want to play! – Is it?

Haye apparently says ‘Now’ in the fight just before Harrison falls!
After the battering Harrison has had off the British boxing public over the years, and even though on a good mates rates for this fight, surely he would have requested a Rocky style ending in this the big one! A gallant effort, going out on his shield on this his final quest to fulfill his destiny! or would that have been too risky a role to perform?
If it was acting, then it wasn’t good acting and Haye will argue that he said ‘Now’ to tell rival Harrison that he was about to land the devastating Hayemaker right hand, he had told him and everyone else he would do prior to the fight and even predicted the round he would do it in! Not bad that for a false Prophet hey Audley? – Either way Harrison stuck to his lines and keeled over right on cue!
Lets hope for the sake of boxing that this is the last we see of it’s kind, and that a boxer who is given the chance to fight for a title at any level, let alone the richest and most decorated prize in sport, ‘The heavyweight championship of the world! doesn’t belittle the honour of the brave champions who have gone before them, when boxers have layed down their body and soul for the chance of a life time and when actions spoke louder than words in boxing!