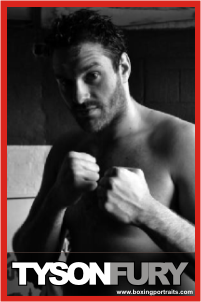 Tyson Fury has already stared out Wladimir Klitschko – now he is pleading with David Haye to postpone his retirement until he has a “real” Battle of Britain.
The two-time English heavyweight champion has been training with IBF, WBO and IBO king Klitschko ahead of his own clash with Galen Brown on Saturday – and says he earned the respect of the world No1.
But he is convinced he would do more than that if he stepped into the ring with WBA champion Haye, who is set to face both Klitschkos next year in a bid to unify the heavyweight division.
After that, Haye says he will retire.
But Fury (pictured) hopes he goes back on that decision long enough to set up an all-English encounter with him.
And, unlike Haye’s farcical clash with Audley Harrison last month, Fury insists this one would be the real deal.
“I need a few more fights, but I’m on Haye’s tail,” said the 22-year-old from Wilmslow. “He’s the one I’m thinking of because he’s the weakest champion.
“I’m big, I’ve got the heart of a champion, I’m fast and I’ve got good power. I don’t think he’d stand a chance. I’m not scared of him. link