Matthew Hatton lined up to face Saul Alvarez in March 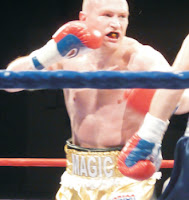 Matthew Hatton has reportedly agreed to fight unbeaten WBC Silver junior middleweight champion Saul Alvarez on March 5th at the Honda Center, in Anaheim, California, USA.
Hatton 29, the current European welterweight champion is lying in wait for his chance and is itching to get another world title fight after his last effort saw him draw with Lovemore N’dou for the IBO belt in 2009.
The Manchester boxer has been calling out to fight the best in the division and in Alvarez, Hatton would be up against one of the emerging stars of world boxing and one of the most talked about talents to come out of Mexico for a few years.
The red haired Alvarez, still only 20, has remarkably already had 35 fights, 0 losses, 1 draw, winning 26 by KO. ‘El Canelo’ has he is nicknamed, meaning ‘cinnamon’ is touted by Oscar De La Hoya has the next pound for pound king of boxing and Mexico believe they have there next flag bearer in the long line of Mexican boxing greats, so Hatton will have his work cut out.
Alverez was lined up to face WBA welterweight champion Vyacheslav Senchenko, but the Ukrainian fighter pulled out of the fight which is likely to be shown live on HBO with Robert Guerrero and Michael Katsidis also on the card.
Alverez recently defeated former champions Carlos Baldomir and Lovemore N’dou. Stopping the rock hard Baldomir in round 6 and out-pointing N’dou.
Hatton is now in the twilight of his 47 fight career, 41 wins, 2 draws, winning 16 by KO, with 4 defeats – and it is a case of now or never for him. If he is to take the fight with Alverez, which could either propel him into the world boxing spotlight and a shot at the welterweight championship of the world or will bring an end to his career.

There is no doubt Matthew will give it his best shot and British boxing will get behind him to accomplish his goal and maybe British fight fans could once again be in Las Vegas on a ‘Hatton wonderland’ as they did in the days of his brother Ricky. www.britishboxers.co.uk admin.

Who is Saul ‘El Canelo’ Alvarez?
Santos Saul Alvarez Barragan was born July 18th, 1990 in Guadalajara, Mexico and after just 20 amateur fights, made himself acquainted with the professional fight game as a fresh faced 15 year-old light-welterweight, knocking out 18 year-old Abraham Gonzalez in four rounds.
With his pale complexion and ginger hair, a trait, which he gained from his mother, his was given the nickname “El Canelo”, which in English means Cinnamon and quickly gathered a fan base due his distinctive looks.
After three more victories, two by knockout, and now boxing at welterweight, Saul experienced his first setback in boxing, as Jorge Juarez held him to a draw in June 2006, in a decision that still hurts Alvarez to this day. He quickly got back in the ring three weeks later and took his frustrations out on Juan Hernandez, whom he knocked out in two rounds.
That was the first of seven straight knockouts for “Canelo”, who was gathering a reputation for hurting his opponents and stopping them early.
A year later, with his record at a healthy 17–0-1 with 14 knockouts, Alvarez took on unbeaten Gabriel Martinez for the WBA Fedecentro welterweight title and took the title at the age of 18, when Martinez retired after 11 completed rounds.
Alvarez would make two defences of the title in the next five fights, four of which were ten round convincing points wins, which would give him valuable experience, even though they were all one-sided affairs in favour of the young Mexican. The last of which was against Larry Mosley, cousin of “Sugar” Shane Mosley in his first fight across the border in the United States.
After dispensing of Raul Pinzon in one round, in his second Stateside bout, Alvarez knocked out Antonio Fitch with 120 seconds to gain the NABF welterweight title and would add the WBO Latino title to that in his next contest as he battered Euri Gonzalez into an eleventh round submission.
Another four knockouts followed for “Canelo” on his way to picking up the WBC Youth welterweight title in August 2009, which he defended, predictably, with a knockout performance over Carlos Herrara, before giving up a third title.
He still held the NABF title as he moved into 2010 and defended it for the last time with a third round knockout win over Brian Camechis in March of that year. He then noticeably struggled to make the 147lb limit when taking Jose Miguel Cotto, brother of Miguel Cotto and stopping him in nine rounds.
With his fan base across the border starting to noticeably swell, Alvarez decided to make a permanent move up the weights and took on Luciano Cuello eight days before his 20th birthday for the WBC Silver light-middleweight title.
Another impressive performance followed as he stopped the Argentinean in six rounds and then defended it in his most high profile fight so far, as he knocked out former world champion Carlos Baldomir in spectacular style at the end of the sixth round at the Staples Center.

In his last outing, Alvarez unanimously out-pointed IBO welterweight champion and boxing veteran Lovemore N’dou, winning almost every round in a stand out performance last month and given his record over the past twelve months, he thoroughly deserves his place in the WBN P4P Top 50.
With five fights and four knockouts in the last twelve months and a total domination of a former world champion, not many of the worlds top boxers can boast a record like that, so that’s why Saul “El Canelo” Alvarez makes it to 49 on our list, along with WBN’s “Young Boxer of the Year” award and our one to watch for 2011. By Phil D. Jay – WBN Editor – www.worldboxingnews.net