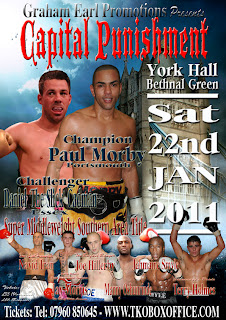 Dollis Hill based American boxer Emmanuel ‘Manny’ Oshinronde is set for his second UK fight this coming Saturday, the 22nd January, at the Graham Earl promoted ‘Capital Punishment’ event at the York Hall in Bethnal Green, London, which is headlined by the BBBofC Southern Area Super Middleweight title clash between Portsmouth’s Paul Morby and Essex’s Daniel ‘The Slick’ Cadman.
29 year old Manny will be facing a tough challenge, on the 22nd, as he will be up against Leicester knockout artist Jahmaine ‘Smasher’ Smyle. Without doubt Manny will have to be on his best form as Jahmaine, who has a 3 win and 1 loss record, has stopped all but one of his previous opponents.
Manny, from Miami in Florida, originally came to Europe in 2007 as he had a professional Basketball contract to play in Italy. Manny spent a season and half playing in Italy but due to a long running knee injury problem, that affected the high level performance he was accustomed to, decided to retire from Basketball in 2009 and move to England and return to his first sporting love, Boxing.
Following a training session, under the watchful eyes of upcoming young coach Barry Smith at Johnny Eames’ Ultrachem TKO Gym in Canning Town, London, Manny spoke of the upcoming showdown with Jahmaine Smyle, “I’m looking very much to the fight because hopefully it’ll be my first win.
My last fight was quite disappointing because I lost, but I really should have won. I had the guy down in the second round but he was saved by the bell.
That’s the problem if you don’t put your guy away, he’ll come back and beat ya. I think I took the guy a little bit too lightly and he crept up and bit me in the butt.
Plus I had a lot of injuries but don’t feel I can make too many excuses though, when you’re up in the ring you have to be ready.
This fight, hopefully, will go the way I want it to go, which is win by knockout. So I’m really looking forward to my first win in the UK.
Sparring’s been going pretty good. I’ve been sparring Mitchell (Balker) from the TKO Gym. I’ve sparred him a couple of times. He’s a big, strong Cruiserweight. I’ve also sparred a couple of guys at Clinton McKenzie’s gym in South London. Pretty good Super Middleweights and Light Heavyweights.”
Emmanuel ‘Manny’ Oshinronde versus Jahmaine ‘Smasher’ Smyle will be on the undercard of Paul Morby vs. Daniel ‘The Slick’ Cadman BBBofC Southern Area Super Middleweight title showdown at the Graham Earl promoted ‘Capital Punishment’ event at York Hall, Bethnal Green, London on Saturday 22nd January 2011.
Graham Earl has put together a top class support card for the Morby vs Cadman title fight that includes the first London outing for Ultrachem TKO’s highly exciting Dutch Cruiserweight prospect Mitchell Balker, who is set for a baptism of fire when he faces Battersea’s super tough Fighting Fireman Nick ‘The Ox’ Okoth, who was runner up at the exceptional Sky televised Prizefighter – Cruiserweights II back in April last year.
Another exciting young fighter from the Ultrachem TKO stable, Welterweight Danny ‘Cassius’ Connor, also has a tough challenge when he faces Graham Earl’s nineteen year old protégé Terry Holmes.
British Masters Light Welterweight Champion Jay ‘The Isle Of Wight Assassin’ Morris, will be taking on another of the Ultrachem TKO team, ‘Dynamo’ Daryl Setterfield, in a non-championship bout.
Hove’s unbeaten Light Heavyweight Navid Iran also has a challenging bout as he faces the very tough Mansfield, Notts, based Latvian Alex ‘Pit Bull’ Spitko.
Don’t blink or you might just miss Joe ‘The Belfast Banger’ Hillerby take on Ryan Clarke. In his last fight Joe stopped Gavin Putney in just 43 seconds! But saying that you can’t write off Ryan easily, as he is also known as a super tough big puncher.
New Milton’s ‘Dangerous’ Danny Goode will be looking to turn around his losing streak when he faces Chris Agyia-Dua. Danny had built up an impressive unbeaten in twelve fight record, that was until he met Jay Morris in December 2007. Since then Danny has lost seven in a row.
Also on the show will be Danny Brown against a yet to be named opponent.
Tickets for the Graham Earl promoted CAPITAL PUNISHMENT at York Hall, Bethnal Green in London on Saturday 22nd January 2011 are priced £35 (unreserved) and £50 (ringside) and are available on-line now at www.tkoboxoffice.com – or for further information call 07960 850645
pics by Gianluca (Rio) Di Caro