The world title showdown will take place at the MEN Arena in Manchester on April 16 – Khan will be defending his WBA light-welterweight title against the European champion from Belfast McCloskey, in what promises to be a tough nights work for ‘King Khan’ in what will be his third defense of his crown.
It will be Khans homecoming fight and another Manchester hero, Ricky Hatton will be co-promoting the big night of boxing in the Arena that he graced so many times himself over the years, notably when he claimed the IBF light welterweight title against the legendary Kostya Tszyu in 2005.
“I had some wonderful nights at the MEN Arena, but Amir Khan is the new kid on the block. It’s very exciting for British fans to see what he’s been learning in the US,” Hatton said. “We’ve been mates for a number of years. He’s come a long way in a short space of time. With Amir fighting in Manchester I feel very, very proud.
Ricky Hatton On Khan vs McCloskey

“If you are a British boxing fan, and you were a Ricky Hatton fan – with that die-hard attitude, take on all-comers – then I think Amir Khan is cut from the same cloth. I think we should get behind him and be very proud of him.”

British Boxers will keep you updated with the latest news from the Khan vs McCloskey press conference and the build up to the fight…..
Khan v McCloskey Fight Quotes.

“Paul’s a little bit shorter than me, he’s 5ft 8in, I’m 5ft 9½, and he seems very confident, Watching his style, he’s got a sharp style and he’s strong. I can’t take this fight easy. – Khan. 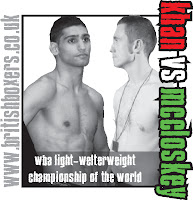 “I have to be in the best shape. I train with Manny Pacquiao, who’s the best southpaw in the world; Freddie Roach has brought a lot of southpaw training partners in. – Khan. I don’t mind fighting southpaws, hopefully it’ll be an easy one. I’m a bigger puncher than him, I know that for a fact. If I catch him clean, he’s going down, there’s no doubt about that. I caught Maidana with a clean body shot and he was very lucky to get back up.“ – Khan

“I want to be world champion, when every fighter goes into the game there dream is to be the best and this is one of the best major belts out there basically, Amir owns it and I want it myself.” – McCloskey


“With Paul McCloskey, I’ve never seen him put down, he’s a strong guy and he can take a good shot. He’s got a good chin, but my boxing skills will win this fight for me. – Khan

“The opportunities here now for me and I intend to grab it with both hands. Some fighters who years ago would climb up the ladder and then never get that chance. Well its here now. Amir coming back to England to fight being world champion and I’m the best in Europe so its the most sensible fight to have over here.” – McCloskey.

“I’ve been thinking about the Timothy Bradley fight because that’s what is driving me to get through this fight. I don’t just want to get through this, I want to win it in style so there is no doubt who the best 140-pounder is.” – Khan.