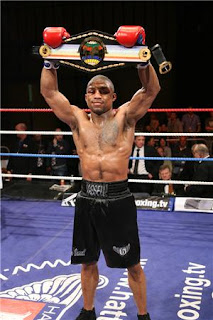 Denton Vassell successfully defended his commonwealth welterweight title against Namibian champion Bethuel ‘Tyson’ Ushona, winning a unanimous points decision  at the Robin Park Centre in Wigan.
Adorning the black shorts, black ankle boots and no socks, Manchester’s Denton Vassell resembles a young Mike Tyson, be it a smaller version of the former heavyweight champion of the world. With the style of the big man as well as attire, he was probably more suited to adorning the nickname than the rangy Ushona was.
Vassell 26, in his come forward style from a peekaboo defence was looking to force the fight and get inside his challenger to land his big hooks to the head and body.
But the challenger, a proud African warrior and unbeaten stylist was making Vassell work for any early success and although the aggressor in the fight, Ushona was countering well with hurtful shots of his own, giving Vassell plenty to think about with his slippery style and boxing know how, covering up well to avoid the punches and tie Vassell up when he got inside.
Vassells was scatty at times and was guilty of smothering his own work as he was looking like he wanted to just grind Ushona to a halt. But with the challengers good use of the ring and nifty footwork, it was hard for Vassell to pin him down to catch him clean.
Vassells body shots did begin to take effect and the high tempo that he had set, looked to have started to get to Ushona who by round nine had slowed down enough for Vassell to land some clean shots.
Ushona was not able now to keep Vassell off him and his work had become messy. The fight pretty much started and finished in the same vain, overall it was Vassell’s pressure that caught the judges eyes and the challenger never did enough to discourage Vassells tenacity.
It was a good win for Vassell in the end, be it not an easy nights work. Bu t we knew going into the fight it would be. Ushona was unbeaten and had proved his credentials in his previous fights, which have seen him claim a world ranking along the way.
Vassell isn’t the finished article and needs to now look to get more fights and rounds in, after being out of the ring for a while. But a satisfying first defence of his belt and a fight he can only learn from.
Judges scores were 118 -111, 117-113 and 117-112
In an undercard contest of unbeaten fighters, Matty Askin and Neil Dawson. It was Askin who was to keep his ‘0’ intact with a 6th round stoppage win to claim the vacant Central Area cruiserweight title.
Both fighters started somewhat tentatively, feeling each other out and looking to see what each other had, before opening up
Dawson’s tactics looked to be to draw Askins in, looking strong and composed, while Askins was finding it hard to get his work off.

But the Blackpool man began to find his range by the midway stage and with his better range of punches began catching Dawson clean.

In the fifth round a both fighters detonated big right hands on each other. but it was Askin who had looked to have come out of it the better and Askins punch had the more telling effect.
Growing in confidence, Askin’s was now putting the punches together with better effect and in the sixth another big right hand caught Dawson high on his head, disorientating Dawson who sagged back to the ropes.
Askin’s pounced to finish off his wounded target and before he could land the finishing blow, the referee jumped in to stop the fight and giving Dawson the dignity of finishing the fight on his feet.
A good win for Askins who should look now to defend his newly acquired title and get some rounds and experience under his belt. But in a division not bursting with British talent, Askins can get better and move on to make his mark domestically in the coming year. 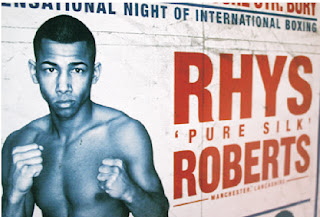 Manchester prospect Rhys Roberts from the Collyhurst and Moston lads club, was pulled out of his contest against Daniel Kodjo Sassou at the end of the 1st round, by coach Pat Barrett, after sustaining what is thought to be a broken hand.

Frenchman Sassou 31, has been a regular face on the Northwest boxing scene lately having also faced Manchester’s Scott Quigg and Joe Murray in recent month’s and would have been a good yard stick fight to judge Roberts own progress in comparison in a fight scheduled for 8 rounds.

Roberts 21, damaged his right hand when he landed a big shot half way through the first session. Barrett, the former British and European light-welterweight champion and training under study to the legendary Brian Hughes, was not tempted to send his charge out and risk permanent damage to the hand.

It means that Roberts surrendered his proud unbeaten record and moves to 12-1 – but it is a decision later said Barrett, talking to Hatton.TV that he stands by.

“When he came back to the corner, he said I think I’ve broke my hand again, I said is it the same one? he said yeah.

“I could have said go out there Rhys and he would have done everything I would have asked him to, he could have fought with one hand! But why do that?

“Because it would have damaged a young fighter, so id rather do this and there’s no shame, as you see he could have clearly battered this kid, but for the future I made the right decision.” added Barrett.

Even though this is a set back for Roberts, after a good first round against Sassou and the contest goes down on his unblemished record as a loss. But Barrett added that now as a trainer he will always put the fighters best interests first, just as his mentor Brian Hughes always has.

“I was always taught like that off a great trainer Brian Hughes, he also did the same thing with me and I’m just following in the same footsteps and following on the legacy through the gym and maybe one day I can be as good as him!” added Barrett.

Welshman Tom Doran stopped Jamie Boness in the 1st round, when his powerful body punches were too much for Boness from Biggleswade who was a late replacement.

Doran 23, who takes his record to 9 fights unbeaten is a good tidy boxer and looks to be a good talented prospect who says he now is ready to be stepped up in class. “Id like to get another few longer round fights under my belt and then be looking at titles and going all the way.”

In another first round blowout Liverpool’s James “Jezza” Dickens stopped Bulgarian Sali Mustafov in lively fashion, dropping his man three times before the referee stepped in.

Full undercard results from Wigan to follow
By Chris Maylett