VIDEO: Craig Watson Interview, the ups and downs of the British welterweight champion

This weekend Craig Watson makes the first defence of his British welterweight title against Lee Purdy at the MEN Arena in Manchester on the undercard of Amir Khan vs Paul McCloskey 16th April.
Watson 28, was crowned with the Lonsdale belt, when he gained revenge over John O Donnell in February having lost to him in 2009 on a controversial split decision.
Against Essex’s Lee Purdy, Watson will be up against a tough challenger who gives his all every fight and as never been stopped in 17 fights. But Watson from Manchester is more than confident that he has the tools to beat Purdy and is confident he will be victorious.
BritishBoxers have been with Watson this week in the run up to the fight and his first appearance at the MEN arena and got an insight into what makes the man tick, his ambitions in the sport and how he now takes his boxing more serious than maybe he has done in the past.
He says he as trained super hard for this defence against Purdy, including top sparring with the likes of American Tim Coleman.
Craig is one of boxing’s nice guys a true down to earth Mancunian who loves boxing and is a massive boxing fan out of the ring. His biggest fan is his Grandma, who is responsible for showing Craig how to throw his first punch and would let him stay up with her to watch the fights on tv.
Craig says his Grandma watches his fights on video everyday and when he won the commonwealth belt he had it put in a case and it is now pride of place on her wall. 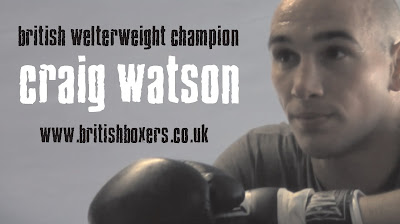 In our in depth interview with Craig he talks about the losses that have made him a better all round fighter. The influence of his long time trainer Joe Pennant and his hopes to give something back to boxing that as given him so much and says he would like to stay and train the kids at the Northside gym in his local area when he finishes his ring career.
Craig also tells us about Knocking down Amir Khan in the ABA finals as an amateur.
Beating Matthew Hatton in defence of his commonwealth welterweight title in a fight he wasn’t expected to win, beating O Donnell to claim the British title, growing up in the Manchester.
The British champion also discusses Kell Brook, the highly touted and number one rated WBO welterweight contender as a possible opponent and believes he has got the beating of the Sheffield man.

To see the full interview with Craig see the video above.

To watch Amir Kahn v Paul McCloskey including Craig Watson v Lee Purdy live on Primetime, channel 480 on Sky, viewers must register beforehand online at www.primetimelive.co.uk or call 0871 200 4444 and buy through box office on the night of the event.
The fight will cost £14.95 and a small one off registration fee will apply for customers new to Primetime. Those without Sky can watch the fight streamed live on www.primetimelive.co.uk for £14.95.
Tickets for are priced at £300, £200, £125, £75, £50 and £40, are on sale now and may be purchased at the M.E.N. Arena Box Office, by calling +44(0)8448478000, or online at www.ticketmaster.co.uk or www.men-arena.com.