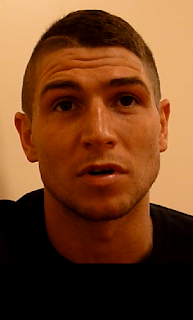 Blackpool’s Brian Rose made a successful first defence of his English light-middleweight title on Friday night, by stopping the previously unbeaten Martin Welsh in the 8th round at the Medway Park Sports Centre in Gillingham, Kent.
Rose 26, won the belt by outpointing Lee Noble in November last year and Rose (left) again shown improvement with a mature performance, eventually wearing down and finishing Welsh in the challengers home town.
After a bright start from Welsh, Rose (17-1, 5KO’s) eventually found his range and rhythm and boxing behind a tight guard, the champion used an accurate array of shots and good defensive skills that had Welsh running out of ideas and steam.
Welsh, had never been beyond 6 rounds and his inexperience began to look more evident, has he lost his composure and although he was throwing out the punches, Rose was calm and composed and was able to slip and counter well and by the fourth round Welsh looked tired and dejected and on an hiding to nothing and deployed a survival mode when he realised that Rose had a painful answer to his own work.
Rose with fresh memories of his knockout loss to Max Maxwell last year, wasn’t going to let a mistake be his downfall again and after a brief rally from Welsh in the seventh, by the eighth round Welsh was there for the taking and Rose obliged, trapping his man in the corner he let rip with a flurry of unanswered punches forcing referee Ritchie Davies to jump in and rescue the Kent boxer at 2:07 of the session.
“The fight went exactly the way I thought in terms of when it was stopped.” Rose told BritishBoxers.
“I knew I would break him down and stop him eventually, I could of stepped it up a bit earlier but found him quite awkward in the earlier rounds.
“I think the fact he stepped up from welterweight to fight me was a telling point, has I felt a lot stronger and when I hit him I think I was hurting him every time.
“Had the best week of my life, I bought a house, had a baby (Oscar) and defended my English title and hopefully earned a crack at the British belt.” added Rose.
Rose, who has been working with a sports psychologist to improve his confidence could now face new British champion Manchester’s Prince Arron, who won the Lonsdale belt on the same bill, when he stopped Sam Webb in the twelfth round.