Wladimir Klitschko’s manager Bernd Boente claimed WBA champion Haye’s conduct in the build-up to the world heavyweight title fight in Hamburg has lost him the support of his home country and British fight fans.
Speaking to Hawksbee and Jacobs on TalkSport, Boente said: “We were both very surprised how many people in London – even in Sky headquarters – were congratulating Vladimir for his charming way and they all wished him good luck and said, ‘knock out the loud mouth’.
“I think England is well known all over the world for fair play, in boxing has its roots in England and the same with soccer. And we all know that English fans are known for fair play and distinguished and David Haye is the opposite of all that. So I think that’s the reason fans don’t like him.”
But Boente insists Klitschko, who is putting his IBF, WBO and IBO belts on the line this weekend, will not underestimate the threat Haye poses. 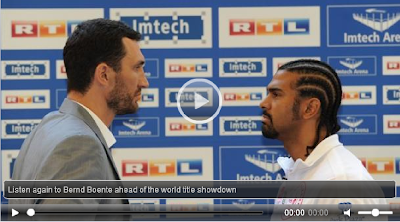 “Vladimir knows exactly what to expect from David Haye and he knows that he could tell him some nonsense before the first bell, come in the ring with another stupid T-shirt, or talk to him like he talked to him yesterday at the stare-down.

“He knows that anything is possible and he knows that he has to be calm and collected and do his job and I’m sure that David will not talk that much more.
“There is no doubt that David Haye is a huge challenge and that he’s one of the best opponents that Vladimir has faced in his career. He’s a very fast guy, he’s a huge puncher, he had a very good amateur career, and Vladimir and his coach do not underestimate David at all.”
Listen to the full interview here